The Young and the Restless Spoilers: Michael and Brittany Low Blows in Court – Cassie’s Death and Adam’s Murder Haunt Nick and Victor

BY Heather Hughes on June 6, 2018 | Comments: one comment
Related : Soap Opera, Spoiler, Television, The Young and the Restless 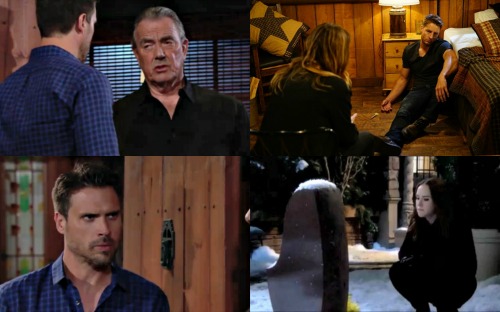 The Young and the Restless (Y&R) spoilers reveal that a vicious war is about to heat up. Victor (Eric Braeden) and Nick (Joshua Morrow) are already preparing for their fierce custody battle. They both know they have to come out swinging if they want things to go their way in court.

That’s why they’ve got some great attorneys to help them out. Michael (Christian LeBlanc) has proven that he can be a real shark, so Victor will trust him to win. Nick will rely on Brittany Hodges (Lauren Woodland) to come out on top. Y&R spoilers had been teasing Brittany’s return for a high-profile case and now we know which one.

Of course, there’s bound to be plenty of courtroom chaos. It should be fun to see Brittany in lawyer mode. If anyone can hold her own against Michael, it’s her. Brittany will undoubtedly get down in the mud if that’s what it takes. She won’t be afraid to use any available ammo against Victor.

Michael will certainly be doing the same against Nick. It’s nothing personal. Michael just has to do everything in his power to assist his client. Sharon (Sharon Case) will try to distance herself from Nick for the sake of his father-son bond. However, that probably won’t stop Michael from bringing her history into all this. All of Nick’s old mistakes will be fair game, too.

Nick ripped Christian out of Sharon and Dylan’s (Steve Burton) loving home with no real transition period. Michael could argue that Christian was treated like property instead of a child. He’ll also bring Christian’s paternity into this. He could point out that Nick was ruthless and the boy wasn’t even his biological son.

Michael will likely reach way back in “Shick” history as well. He might even bring up the circumstances surrounding Cassie’s (Camryn Grimes) death and suggest that her parents were negligent. That’d be a low blow, but Brittany will deliver a few of her own. Nick could fill her in on Victor’s partnership with Chloe (Elizabeth Hendrickson) and how he contributed to Adam’s demise.

There wouldn’t be proof, but Nick could at least call Victor’s parenting skills into question. Victor’s long list of crimes should also come into play. Brittany will paint Victor as the cruel villain that he is. He only gives out love if his kids do exactly what he wants. Victor just won’t provide the right environment for Christian to grow up in.

The Young and the Restless spoilers say this custody battle will cause major controversy. The Newman name will be splashed all over the news and stunning secrets will affect the future of the company. Victor may regret going this far once his legacy’s on the line.

It sounds like some fantastic material’s ahead on The Young and the Restless. Are you anxious to watch the mayhem unfold? We’ll give you updates as other Y&R details emerge. Stay tuned to the CBS soap and don’t forget to check CDL often for the latest Young and the Restless spoilers, updates, and news.