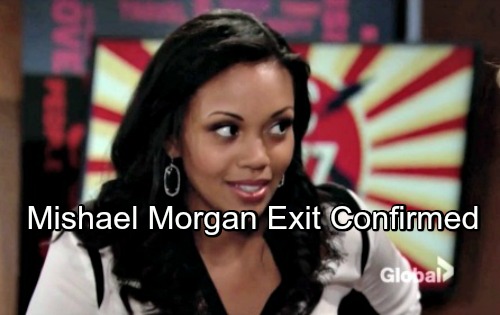 The Young and the Restless (Y&R) spoilers tease that the CBS soap is facing a devastating blow. TV Source recently reported on some buzz about Mishael Morgan exiting the role of Hilary. Some Y&R fans held out hope since nothing was confirmed, but we were all bracing for bad news.

Unfortunately, that news is now here. Daytime Confidential revealed that Morgan is indeed leaving following unsuccessful contract negotiations. No one can blame Morgan for wanting more money. She’s one of the show’s most popular actresses and her character carries a good chunk of the drama.

Naturally, Morgan would expect and deserve to be treated like a big star come contract time since that is how TPTB use her on Y&R. Women in Hollywood are consistently paid far less than male actors carrying the same load – could Morgan have insisted on a contract commensurate with that of her male co-stars and been turned down?

It seems Morgan played hardball (as she should have) and Y&R pushed back. Soaps are always cutting budgets and adding characters. They apparently just couldn’t afford Morgan anymore, so she had to walk away. Naturally, social media is a mess right now. People are throwing tantrums all over the place. Hilary’s been stirring the pot since 2013, so Y&R watchers are certainly going to feel this loss.

Of course, fan backlash can be pretty powerful. There’s always a chance The Young and the Restless will try to undo the damage. It wouldn’t be the first time a soap reacted to outraged viewers and tried to fix their mistake. Then again, you can bet Y&R truly tried to keep Hilary around. She’s been a crucial character for five years, so they surely knew the level of drama this would cause.

Morgan’s exit is a done deal at this point and no one knows what might’ve been filmed already. Her final airdate is still unknown. Word has it they have a heartbreaking sendoff planned for Hilary. If the shocker’s been taped, Y&R will likely stick with their decision.

The Young and the Restless spoilers hint that tragedy will strike soon. The latest buzz suggests that a car accident could bring deadly consequences. If Hilary suffers a miscarriage in the crash, she may leave town in despair. The worse option would be that both Hilary and her unborn child will perish.

This is going to be crushing for Devon (Bryton James) any way you slice it! Do you think Hilary will be killed off? Would you rather see Y&R go with a recast? We’ll give you updates as other Y&R details emerge. Stay tuned to the CBS soap and don’t forget to check CDL often for the latest Young and the Restless spoilers, updates, and news.