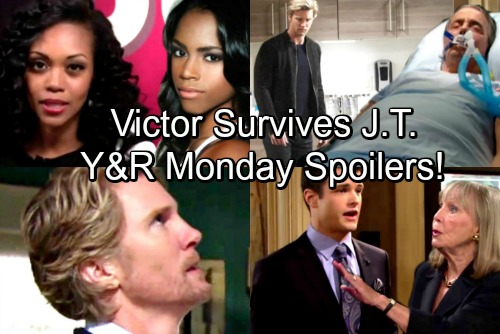 The Young and the Restless (Y&R) spoilers for Monday, April 9, tease that more bombshells are ahead on the CBS soap. Friday’s episode brings quite a cliffhanger when J.T. (Thad Luckinbell) starts to panic. As the investigation revs up and Victor’s (Eric Braeden) health improves, J.T. shuts off his life support in an effort to keep his secrets. We’ll see the aftermath of that decision on Monday.

There are a few outcomes to consider here. It’s possible that J.T. will change his mind and turn Victor’s breathing machine back on, but we’d say that’s the least likely option. Y&R doesn’t seem interested in showing any kind of soft side. J.T.’s getting nastier every day, so it’s doubtful that we’ll ever see him be a decent human being again.

Of course, someone could easily rush in and save Victor in the nick of time. After J.T. slips out, a nurse might arrive to flip the switch back on. It’s also possible that Victor will simply improve enough to breathe on his own. J.T. could simply speed the process along with his latest move.

Regardless, The Young and the Restless spoilers say Victor’s family is in for a real shock. Since we know Braeden isn’t going anywhere, that means Victor will pull through. However, there’ll probably be some other hurdle that prevents Victor from pointing the finger at J.T. He may have some memory loss thanks to the complications that recently developed. There must be some way to drag this story out!

Elsewhere, Hilary (Mishael Morgan) should be pretty pleased with herself. On Friday, Hilary fills Simone (Shanica Knowles) in on her baby-making sessions with Devon (Bryton James). Naturally, Simone blows her top. Devon really shouldn’t be surprised by the outburst. What kind of reaction did he expect? No woman is going to give her man a pat on the back for sleeping with his ex-wife.

Nevertheless, Devon would’ve preferred to break the news gently. On Monday, he won’t be happy that Hilary gave Simone updates and caused drama. This is a move right out of Hilary’s playbook, so Devon may have some reservations about having a kid with her. Since Simone won’t allow any more pregnancy attempts, Devon may suggest that it’s in fate’s hands now. He might hope that it didn’t take!