BY Jessica Jones on February 2, 2018 | Comments: one comment
Related : Soap Opera, Spoiler, Television, The Young and the Restless 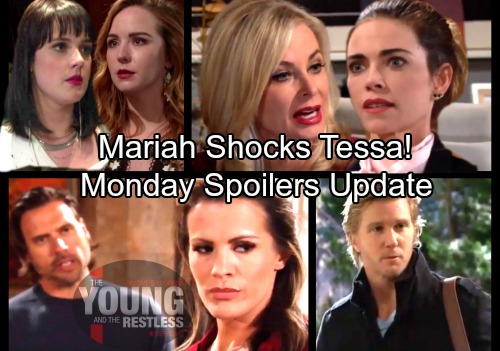 The Young and the Restless (Y&R) spoilers update for Monday, February 5, tease that J.T.’s (Thad Luckinbell) move will anger Cane (Daniel Goddard). When Cane learns J.T’s been helping Fenmore’s, he’ll insist it’s a contract violation. Cane will warn that J.T. had better not pull something like this again.

Nearby, Phyllis (Gina Tognoni) will spot Nikki (Melody Thomas Scott) doing a walk of shame. She’ll indicate that she saw Nikki headed upstairs for a hot night with Arturo (Jason Canela). Instead of taking jabs, Phyllis will basically congratulate Nikki. She’ll think it’s great that Nikki scored herself some sex with a young hunk.

Meanwhile, Mariah (Camryn Grimes) will worry about Tessa (Cait Fairbanks) being homeless. Sharon (Sharon Case) will make it clear that Tessa’s not moving back in with them. Since Nick (Joshua Morrow) has spots open at the new complex, Mariah will convince him to give Tessa one. When Tessa finds out what Mariah did for her, she’ll be incredibly grateful.

Other Young and the Restless spoilers say Ashley (Eileen Davidson) and Victoria (Amelia Heinle) will have a war of words. Later, Victoria will vent to J.T. He’ll chime in that he’s having work problems of his own. After he reveals his Cane issues, Victoria will push J.T. to join Newman’s team. He’ll agree to think about becoming the head of their security department.

After J.T. heads out, Victoria will spar with Ashley once more. They’ll eventually get to the source of their conflict, which is who will sit on throne. Victoria will think she’s the natural choice, but Ash will hint that nepotism doesn’t always pan out. The board may put the best person for the job in charge once Victor’s (Eric Braeden) gone.

At the penthouse, Nick will wonder why Chelsea (Melissa Claire Egan) seems off. She’ll look nervous when he mentions using her donation for a playground. Chelsea will insist she’s fine before meeting with Lauren (Tracey E. Bregman), Phyllis and J.T. She’ll be against the idea of press release about their drama.

Chelsea will be just as upset about J.T.’s next plan. He’ll want to get the security footage from the bank connected to Alexandra West. Chelsea will draw suspicion when she fights J.T. on it. She’ll think they should just forget it and let Chelsea 2.0 take the hit.

Back with Sharon, she’ll get updates from Phyllis. Y&R spoilers say Sharon will mention the cash stacks that were hidden in the penthouse. At home, Chelsea will fib to Nick again. She’ll contend that Lauren’s the one who wants to drop the investigation.