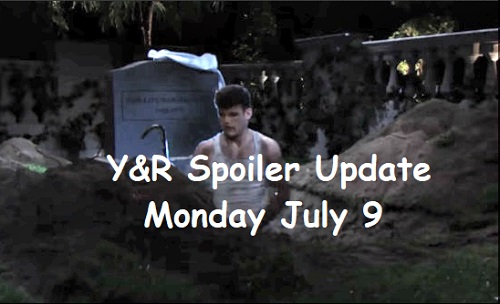 The Young and the Restless (Y&R) spoilers for Monday, July 9, tease that Kyle (Michael Mealor) will get busted. After Esther (Kate Lander) tips off the cops, Kyle will be arrested for digging up Phillip Chancellor’s (Donnelly Rhodes) grave. Once Jack (Peter Bergman) receives the news, he’ll head to night court with Summer (Hunter King).

Later, Jack will give Kyle a lecture at the Abbott house. He’ll insist that Kyle’s going to clean up this mess. After Esther shows up, Kyle will apologize and butter her up a bit. She’ll decide to put in a good word for him with Jill (Jess Walton), who’s sure to be furious soon.

Once Jack and Kyle are alone, they’ll argue about how far Kyle took this. The Young and the Restless spoilers say Kyle will rant about his situation at Jabot. He’ll feel like he deserves a higher position, but Jack will want him to be patient.

Kyle will insist he might get his wish sooner than expected. He’ll pull out a bone he located in Phillip’s grave and propose a DNA test. Kyle will hope they can make a power play at Chancellor Industries in the near future.

Other Young and the Restless spoilers say Mariah (Camryn Grimes) and Hilary (Mishael Morgan) will work late at Hamilton-Winters. After Hilary gets a cramp, Mariah will help her get settled in at home. Hilary won’t be satisfied with her online medical research, so she’ll head across the hall to ask Nate (Brooks Darnell) for help.

It’ll take some convincing, but Nate will finally give Hilary a quick exam. Afterward, he’ll suggest that everything seems OK. Nate won’t have any concerns about Hilary and her baby. On her way out, Hilary will offer an apology for how harsh she was before. She’ll bring up Nate’s deceased girlfriend, which will set him off and spark more conflict.

At Sharon’s (Sharon Case) place, Nikki (Melody Thomas Scott) will panic over seeing J.T. (Thad Luckinbill) outside. She’ll fear that he might be on his way to kill Victor (Eric Braeden). Sharon will be just as concerned about J.T.’s next move. Both ladies will fret over a noise upstairs, but it’ll just be Nick (Joshua Morrow) emerging from the shower.

The Young and the Restless spoilers say Nick will hear the J.T. shocker and plan to check out the main house. Suddenly, someone will enter the front door. Nick will snatch up the fireplace poker and nearly hit Mariah with it. She’ll wonder what in the world’s going on.

After Nick checks on Christian (Jude and Ozzy McGuigen), he’ll report back with updates. The tot’s safe, but there’s no sign of Victor. Fortunately, Vic will appear moments later. He’ll learn that J.T. was there and reassure a nervous Nikki. Y&R spoilers state that she won’t want to sleep alone tonight. No one can blame her for that!

Back with Nick, he’ll vow to protect Sharon and Mariah. Everyone will remain on edge, but at least they can stick together through this crisis. We’ll keep you posted as other Y&R details emerge. Stay tuned to the CBS soap and don’t forget to check CDL often for the latest Young and the Restless spoilers, updates, and news.