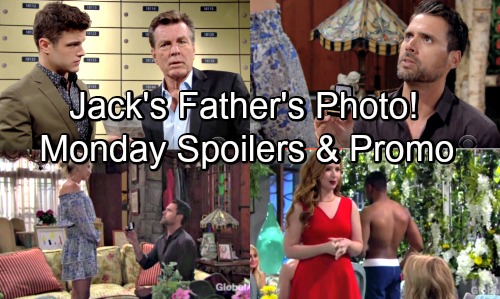 The Young and the Restless (Y&R) spoilers update for Monday, June 18, tease that Brittany (Lauren Woodland) will be brutally honest. She’ll suggest that if Nick (Joshua Morrow) wants custody of Christian (Jude and Ozzy McGuigen), he should seriously consider breaking up with Sharon (Sharon Case). Nick will insist it’s not happening, but Brittany will warn that it may be the only way.

Meanwhile, Sharon (Sharon Case) will open up to Victoria (Amelia Heinle). They’ll discuss how low Victor stooped and what can be done. Victoria will think maybe they can convince Victor to back down, but that’s clearly not an option. Victor seems set on keeping Christian from Nick indefinitely.

Sharon will fret about costing Nick custody before eventually meeting back up with him. She’ll insist that they need to split, but Nick will refuse. Instead, he’ll talk about the force that keeps pushing them together. Nick will believe they’re meant to be, so he’ll drop to one knee and pop the question.

Back with Brittany, she’ll stop by Newman Enterprises. Brittany will hope to secure Victoria as a witness against Victor. The Young and the Restless spoilers say Victoria will vow to be honest in her testimony. She certainly doesn’t agree with what Victor’s doing to Nick right now.

After talk turns to J.T. (Thad Luckinbill), Brittany will question what drove him to violence. Victoria won’t want to get into it, but Brittany will note that J.T. should turn up sooner or later. She won’t think he can hide forever. Of course, Victoria will suggest Brittany’s wrong about that. She’ll contend that it’d be better for J.T. to stay away anyway.

Other Young and the Restless spoilers say Summer’s (Hunter King) manipulation will continue. She’ll urge Phyllis (Gina Tognoni) to put her on a project for Jabot. Naturally, Summer will secretly want to get closer to Billy. When Phyllis pitches the idea to her beau, Billy won’t think it’s a good one. He’ll assume this is coming from Summer and argue that she wouldn’t be the right fit.

Nevertheless, Phyllis will manage to get a “yes” from Billy. He’ll throw Summer a curveball by forcing her to join forces with Kyle (Michael Mealor). Summer will complain, but Phyllis will think they could be a great team. Y&R spoilers say Phyllis will try to Summer excited about the partnership.

Afterward, Summer will feel the need to share her views with Billy. She’ll corner him in his office and ask about his fears. Summer will think Billy’s afraid to work with her, but he’ll suggest that boundaries are necessary. Once Phyllis appears, they’ll claim they were just talking about Summer’s new duties.

Finally, Jack will get updates on his potential father. The key he found will open a safe deposit box at the bank. Kyle will be there to support Jack through his discovery, which is a real doozy! A picture in the box will show Dina (Marla Adams) standing next to Phillip Chancellor. Since the photo will be dated nine months before Jack’s birth, he’ll suspect Phillip could be his bio dad.

Y&R fans won’t want to miss the rest of Jack’s mission. We’ll keep you posted as other news comes in. Stick with the CBS soap and don’t forget to check CDL often for the latest Young and the Restless spoilers, updates, and news.