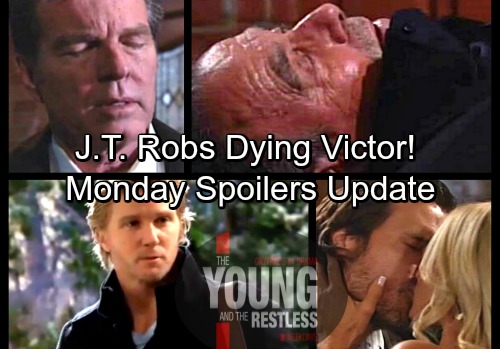 The Young and the Restless (Y&R) spoilers for Monday, March 26, tease that J.T. (Thad Luckinbell) will grab the envelope he needs from Victor’s (Eric Braeden) office and head out. He’ll leave Victor there to die and return home to Victoria (Amelia Heinle). Afterward, Jack (Peter Bergman) will show up to find Victor unconscious on the floor. He’ll decide to dig around a bit before he calls for help.

Jack will grab a few things from Victor’s office, including a flash drive that’ll be important later. Once he’s done rummaging, he’ll dial 911 and get some paramedics over to the ranch. When Paul (Doug Davidson) arrives, he’ll grill Jack about why he’s there and what he saw. Jack will lie that he wanted to apologize to Victor for an earlier fight. He’ll note that the place was a mess when he walked in. 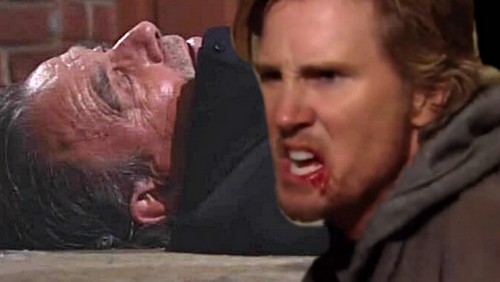 Someone will eventually locate Victor’s phone and send it to the forensics department. Meanwhile, J.T. will call Paul to let him know he got the goods. He’ll reveal that he has proof of Victor’s price-fixing. J.T. will also get rid of the spy cam that Victor set up at Victoria’s place. After Victoria hears about Victor’s assault, J.T. will do his best to keep his big secret.

Over with Nick (Joshua Morrow) and Sharon (Sharon Case), they’ll continue to kiss passionately. The Young and the Restless spoilers say they’ll stop short of making love, but Sharon will hint that maybe Nick should stay. They’ll agree that they feel something for each other, but Nick won’t think the timing is right.

Once Nick learns Victor has been assaulted, he’ll march over to Nikki’s (Melody Thomas Scott) suite. She’ll realize she missed messages while she was busy in bed with Arturo (Jason Canela). At the hospital, Victor’s loved ones will gather to fret and ponder the attacker’s identity.

Outside the building, Hilary (Mishael Morgan) will report on the incident. She’ll explain that Victor is in a coma just before Paul joins her. The Young and the Restless spoilers say Paul won’t offer any hints about the culprit. He’ll think it’s too soon to tell who did this, but he’ll promise to get justice.

After Jack comes home and updates them on Victor’s attack, Abby and Ashley will leave for the hospital. Jack will use his alone time to look at the flash drive he stole. He’ll hook it up to his own computer and discover some shocking emails. Kyle (Michael Mealor) has been plotting with Victor!

There are more bombshells ahead on the CBS soap, so tune in for all the drama. We’ll keep you posted as other news comes in. Stick with Y&R and don’t forget to check CDL often for the latest Young and the Restless spoilers, updates and news.