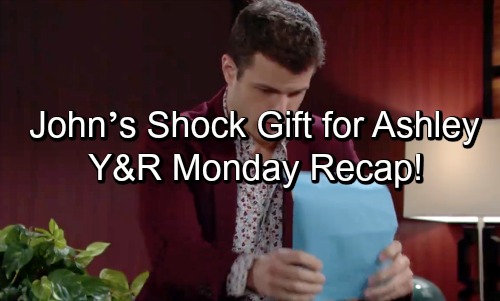 The Young and the Restless (Y&R) spoilers update and recap for Monday, October 22, tease that Kyle’s (Michael Mealor) in for a shock. After he removes a file from the Jabot safe, Dina (Marla Adams) will be tickled pink. She’ll struggle to find the document she’s looking for, but it’ll finally turn up. When Kyle examines it, he’ll be horrified by what it reveals.

This document grants Ashley (Eileen Davidson) the rights to all patents and developments at the company. It’s airtight forever and basically means Ashley can do whatever she wants with Jabot’s big lines. Kyle will learn Dina and John (Jerry Douglas) planned it together as a present for their daughter.

Since it features John’s signature, Kyle will know there’s no wiggling out of it. He’ll try to shred the paper when Dina’s not looking, but she’ll end up catching him. Dina will shout at Kyle to stop, so his plan will be foiled for now.

Other Young and the Restless spoilers say Sharon (Sharon Case) will start to panic. In light of the blackmailer’s new threat, she’ll be convinced that they have to pay up. Victoria (Amelia Heinle) will point out that it’s risky. The blackmailer could easily take the $250,000 and come back for more.

At the athletic club, Phyllis (Gina Tognoni) will fill Jack (Peter Bergman) and Nick (Joshua Morrow) in on her epiphany. She’ll be ready to move on from Billy (Jason Thompson) and make better decisions. They’ll wonder what sparked this change of heart, but she’ll simply suggest that she saw Billy’s true colors.

After Nick takes off, Phyllis will open up to Jack a bit more. She’ll get choked up about her affair and how much she hurt him. Phyllis will be amazed that Jack was able to forgive her after that. He’ll promise that he put it behind him long ago, so they’ll share a tender moment.

At the coffeehouse, Nikki (Melody Thomas Scott) will be playing with Christian (Jude and Ozzy McGuigen) when Nick walks in. After Nikki looks at all the messages she’s missed, she’ll leave in a hurry. Rey (Jordi Vilasuso) will notice and comment that Sharon was in a rush earlier, too.

Nick will decide to put Rey in his place, so he’ll warn him about fooling Sharon. He’ll refuse to believe the nice guy act Rey’s pulling. Nick will insist that he’s the man for Sharon and that’s that. He won’t want Rey interfering with his reunion plans.

Back at Newman, Phyllis will do some digital detective work. Unfortunately, she won’t be able to determine the blackmailer’s identity. The cover-up crew will debate digging up J.T.’s (Thad Luckinbill) body and eliminating the leverage.

Sharon will nix the idea and argue that they should just send the money instead. She’ll eventually head home for a movie night with Mariah (Camryn Grimes), but that’ll bring another round of bad news. Mariah will get a phone call with only heavy breathing on the other end. She’ll note that it’s the 10th call she’s received today from a blocked number.

Y&R fans can expect Sharon’s fears to rev up. Mariah will confess that she felt like somebody was following her earlier. That’ll convince Sharon to call the rest of the girls’ night gang. She’ll excuse herself to reach out and offer a warning to the others. Sharon will argue that if they come for her kids, it’s game over.

Since the threat could be growing, Nikki will think it’s time to make the payment. Something tells us it won’t be that simple! The Young and the Restless spoilers say more danger’s brewing, so stay tuned. We’ll give you updates as other Y&R details emerge. Stick with the CBS soap and don’t forget to check CDL often for the latest Young and the Restless spoilers, updates, and news.