The Young and the Restless Spoilers: Kristoff St. John Spotlighted – Neil Brings Jack Back From The Edge

BY Sean O'Brien on May 19, 2018 | Comments: Leave Comments
Related : Soap Opera, Spoiler, Television, The Young and the Restless 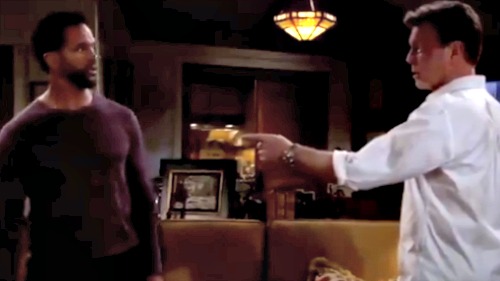 The Young and the Restless spoilers tease that Jack (Peter Bergman) will be helped by Neil (Kristoff St. John). Fittingly, this storyline also allows St. John to be spotlighted on Y&R.

The revisited addiction storyline, where Bergman’s character has again fallen off the wagon naturally led to Neil’s presence. These co-sponsors have helped each other battle their demons through the years. Never fully recovering, Jack’s pill addiction and Neil’s alcohol issues often have led to each friend being there for the other.

This time around Jack drove recklessly after appearing to confirm that John (Jerry Douglas) wasn’t his father. That led to a car accident he walked away from. A bit daytime drama-ish? Yes, but the scenario allowed St. John to play mentor, which was cool.

As loyal Y&R fans know, St. John needed to leave the cast last fall. He was suffering from the afteraffects of his son’s real life death which took place earlier this decade. The pressure of that situation necessitated St. John taking a mental health break.

Social media has many positive aspects, which includes celebrities serving as their own press agents. St. John kept his fans updated while he was off-set and then announced his return to the cast this year.

The advice Jack receives from Neil will aid in a recognition that no answers can be found through a cowardly drug dealer. And said dealers are violent criminals, despite what political personalities falsely attempt to claim. Drug dealers use their free will to obtain dangerous, illegal, addictive substances and then sell them to others without paying any tax in so doing. In the process of plying their trade they funnel billions of dollars annually to organized crime.

Neil is standing with all who know, not just spout, that actions have consequences. He’s not going easy on Jack. A weak enabler would push that bile. Neil also knows Jack helped to pull him back from the brink when he was nursing the bottle. Sponsors are crucial during times such as these.

Legacy characters can be created on long-running shows. The presence of iconic actors makes any beloved fictional persona memorable. Such is the case with Bergman (who joined the cast in 1989) and St. John (who initiated Neil’s role in 1991). Their talent is the reason why Jack Abbott and Neil Winters are great friends and indelible characters on this classic soap opera.