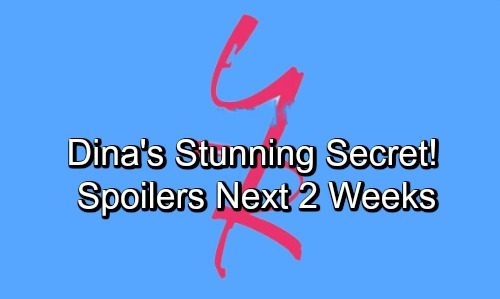 The Young and the Restless (Y&R) spoilers for the next two weeks tease that we’ll see some stunning faceoffs and some growing suspicions. During the week of October 15-19, Jack (Peter Bergman) will blast Ashley (Eileen Davidson) for destroying his whole world. Her paternity deception plot hurt him deeply, so he’ll most likely plan to make her pay.

Jack will come up with a new plan, but it won’t go as well as he hoped. After Jack crashes and burns, it could widen the rift with Ashley. Meanwhile, Billy (Jason Thompson) will come home from rehab a bit calmer than before. He’ll still be bitter and broken, but he’ll have a better grip on both his anger and his gambling problem.

Unfortunately, Billy’s rage will soon rise once again. After Phyllis (Gina Togoni) eavesdrops on Summer (Hunter King) and Billy’s conversation, she’ll realize they had a steamy tryst. That’ll lead Billy to rub it in and savor a little revenge on his ex. Over with Kyle (Michael Mealor), he’ll feel torn between two love interests. Lola (Sasha Calle) will pull him closer, but he’ll struggle to let Summer go.

Later, Dina (Marla Adams) will point Kyle in the direction of a safe at Jabot. It seems John (Jerry Douglas) left behind a juicy secret that could rock the Abbott clan once again! Elsewhere, Mariah (Camryn Grimes) will return from her week-long location shoot. She’ll quickly determine that Sharon (Sharon Case) and Rey (Jordi Vilasuso) have grown closer.

Naturally, Mariah will have some concerns about that. Rey hasn’t proven trustworthy, but Sharon will continue letting her guard down around him. That’s not a good idea, especially since a threat’s revving up. The cover-up crew will have to pay $250,000 to keep their J.T. (Thad Luckinbill) secret quiet. When they call the blackmailer’s bluff, he or she will send proof that they know the truth.

The week of October 22-26 will bring out the softer side of Phyllis. She’ll patch things up with someone, but who will it be? Probably not Billy or Summer! It’s doubtful she’ll forgive either of them for their betrayal anytime soon.

However, Phyllis might go a little easier on Sharon. After all, Phyllis is the one who slept with Sharon’s fiancé. After all the Summer sex drama, Phyllis may even think Sharon did her a favor by blowing everything up. Y&R fans will be anxious to see if they can call a truce.

Other Young and the Restless spoilers say Dina will stun Ashley. The Abbotts may try to keep her in the dark on all the family drama, but Dina might figure out that something’s up. If Dina’s lucid enough to put some of it together, she could rip into Ashley for hurting poor “Jackie.”

In prison, Lily (Christel Khalil) will cook up an escape scheme. Will it be for her, another inmate or both? Any of these options could land Lily in hot water! Over with Abby (Melissa Ordway), she’ll feel like Arturo’s (Jason Canela) hiding a shocker. Abby will grow increasingly curious about what it is, so she won’t rest until she gets answers.