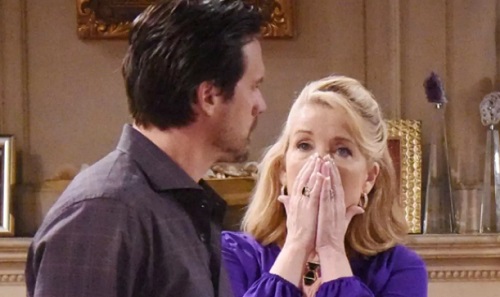 The Young and the Restless (Y&R) spoilers tease that we’ll see a messy situation in Genoa City. Thanks to Nikki’s (Melody Thomas Scott) quick thinking on Friday, Victoria’s (Amelia Heinle) saved from J.T. (Thad Luckinbell) the maniac. That’s the good news. The bad news is that Nikki, Victoria, Sharon (Sharon Case) and Phyllis (Gina Tognoni) will have to keep a dangerous secret.

These ladies don’t want the cops to get the wrong idea about Nikki’s actions. She’s dealt with many deadly dilemmas over the years. Longtime Y&R fans will recall that Nikki killed both her father and Diane Jenkins (Maura West) in self-defense. Nikki stepped up to protect her daughter in this case, but there’s no real proof of that. It’s risky to spill the story to police and potentially let Nikki face charges.

Instead, Nikki and the others are going with a cover-up. After J.T.’s body is disposed of, they’ll agree to take this secret to their own graves. Victoria may be especially determined to keep this quiet. J.T. was a ruthless beast and no one should end up behind bars because of him. Victoria may believe J.T.’s caused enough suffering. She may even think he got what he deserved. 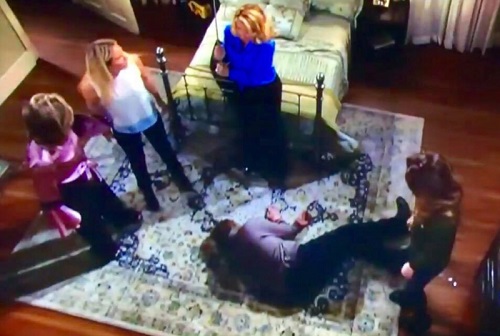 However, secrets tend to spread on the CBS soap. The Young and the Restless spoilers say another Newman family member will soon get updates. Nick (Joshua Morrow) will be stunned when he hears exactly what happened that night.

Perhaps Sharon will be the one to fill him in. They’re living together, so Nick will certainly notice that Sharon’s on edge. It won’t take long for him to pry it out of her. This secret actually affects several people that Nick holds dear. Nikki, Victoria, Phyllis and Sharon are all loved ones that he cares about.

The Young and the Restless spoilers say Nick will vow to protect the cover-up crew, but is that a promise he can keep? Y&R viewers won’t want to miss the shocking moments ahead. There’s much more drama to come in GC! We’ll keep you posted as other details emerge. Stay tuned to the CBS soap and don’t forget to check CDL often for the latest Young and the Restless spoilers, updates and news.

J.T.’s confession leads to a shocking turn of events today on #YR! pic.twitter.com/Qj20zgOksZ