The Young and the Restless Spoilers: Nick’s Hookup with Phyllis Exposed – Fierce Sharon Fights Back, Done with Nick and His Games

BY Heather Hughes on August 9, 2018 | Comments: one comment
Related : Soap Opera, Spoiler, Television, The Young and the Restless 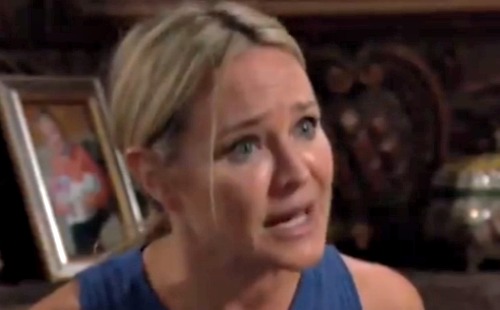 The Young and the Restless (Y&R) spoilers tease that Nick’s (Joshua Morrow) counting on a bright future with Sharon (Sharon Case). They’ve certainly faced some ups and downs lately, but Sharon’s trying to hang in there. She was naturally upset when she found out Nick deceived her about the J.T. (Thad Luckinbill) impersonation plot. Nick’s newfound dark side really caught Sharon off guard.

Y&R fans know Sharon’s keeping a big secret as well, but that situation’s a bit different. Nikki (Melody Thomas Scott) did nothing wrong by defending Victoria (Amelia Heinle). J.T. was a monster in the end, so he had to die. The cover-up is the real problem, but Sharon made a pact with the others and doesn’t want anyone to suffer. They’ve all been through enough as it is.

Nick’s scheme, on the other hand, was pretty selfish. Once he got Christian (Jude and Ozzy McGuigen) back, Nick just had to keep pushing for the sake of revenge. It was all about Nick and what he wanted. In fact, selfishness seems to be a recurring theme with Nick these days.

The Young and the Restless spoilers say Sharon will remain against moving off the ranch. She just wants to stay at the cottage and live in the home where she’s made so many memories. However, Nick’s pressuring Sharon to change her mind and find a new place. He won’t let it go, so he’s seriously disrespecting Sharon and her wishes.

Of course, hooking up with Phyllis (Gina Tognoni) was the biggest slap in the face. All Sharon had to do was take her ring off and two seconds later Nick was rolling around on the kitchen island with his ex. Who does that?! The Young and the Restless spoilers say Summer (Hunter King) will make a startling discovery next week, so this could be the beginning of the end for “Shick.”

Summer’s main objective is breaking up Billy (Jason Thompson) and Phyllis, but you can bet the news will get back to Sharon eventually. Sharon has overlooked Nick’s flaws and their growing list of problems, but she may have to put her foot down. It’s tough to believe Sharon will stick with their engagement after this. She’s not a doormat, so it’s time to dump Nick and find a new path.

Are you ready to see fierce Sharon’s return? Will Nick pay a steep price for his betrayal? We’ll give you updates as other Y&R details emerge. Stay tuned to the CBS soap and don’t forget to check CDL often for the latest Young and the Restless spoilers, updates, and news.