The Young and the Restless Spoilers: Nikki Explodes Over Sharon’s Shocker – Victor Faces the Wrath of His Raging Wife

BY Heather Hughes on May 31, 2018 | Comments: one comment
Related : Soap Opera, Spoiler, Television, The Young and the Restless 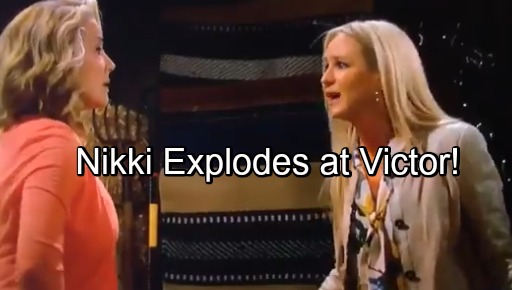 The Young and the Restless (Y&R) spoilers tease that Sharon (Sharon Case) will deliver some stunning news to Nikki (Melody Thomas Scott). In fact, this will be a double whammy. Nick (Joshua Morrow) is fed up with Victor’s (Eric Braeden) attempt to tighten his grip. Victor’s threatening to move forward with a custody battle, but Nick somehow thinks he can escape it by moving to San Diego.

Of course, that’s not how it works. If Victor wants to take action, he’ll take action. He certainly won’t let Nick’s plans stop him. If Nick tries to run away from this, it’ll just make Victor more determined to get his hands on Christian (Jude and Ozzy McGuigen). Nick’s only going to make the conflict worse, but isn’t that what Nick does best?

Sharon will go along with her beau’s big idea, but her concerns will weigh on her. She’d much rather stay in Genoa City than uproot Faith (Alyvia Alyn Lind) and leave Mariah (Camryn Grimes). Furthermore, Sharon won’t think it’s fair for Victor to basically run Nick out of town. She’ll decide to give Nikki some crucial info and hope that it pays off.

The Young and the Restless spoilers say Sharon will blab about her upcoming move with Nick. When a confused Nikki asks why they’re leaving, Sharon will drop the second Y&R bomb. She’ll insist that Victor’s to blame. Nikki will demand the details, but Sharon will suggest she should take this up with Victor. She’ll think Nikki’s ruthless husband should explain how he’s hurting Nick this time around.

Nikki will undoubtedly track Victor down immediately. She’ll want an explanation for all this, so Victor will surely spin the situation his way. He’ll try to act like he’s right and Nick’s wrong as usual. However, this isn’t Nikki’s first rodeo with Victor. She’ll inevitably see right through his claims and call him out on his selfish power trip.

The Young and the Restless spoilers suggest that Victor will indeed sue for custody of Christian. It sounds like he’ll go against Nikki’s wishes and create more drama in his marriage. You can bet that Nikki will attack Victor over all the pain he’s causing. Will these two ever overcome the obstacles?

Y&R has some great scenes in store over the next few weeks. We’ll give you updates as other details emerge. Stick with the CBS soap and don’t forget to check CDL often for the latest Young and the Restless spoilers, updates, and news.