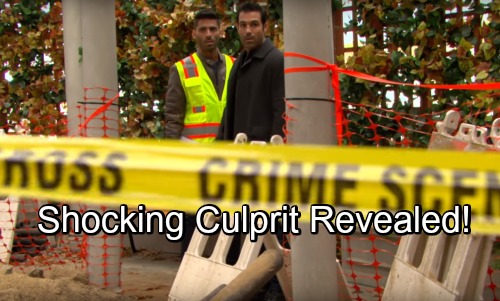 The Young and the Restless spoilers tease that many candidate answers can be provided for the question that leads this feature – Who is going down during November sweeps – who is blackmailing the cover-up crew and which member of the J.T. burial squad will pay the biggest price? So, among all Genoa City residents, who is most likely to feel a November crash?

Nikki (Melody Thomas Scott) appears to be the leading coverup crew member who could experience personal destruction during November sweep. While Vickie (Amelia Heinle), Phyllis (Gina Tognoni), and Sharon (Sharon Case) are complicit in the ongoing lie about what really happened to J.T. (Thad Luckinbill), Nikki is the person who accidentally killed him, didn’t report his death, and then helped to bury his body in Chancellor Park.

Of course Phyllis was the ringleader who insisted on the cover-up and would be a perfect soapy takedown target given her newfound position as Jabot CEO. Mitigating against this well-deserved karma seems to be Y&R’s obvious Phyllis favoritism – she’s like Genoa City’s Teflon Don, a role formerly enjoyed by Victor Newman.

The fact that J.T.’s body somehow no longer rests beneath the piece of modern art that Jill (Jess Walton) unknowingly placed atop the unmarked grave confirms that this storyline has moved into its next phase. Will that result in Nikki being arrested for murder?

Victor (Eric Braeden) will soon return from a brief absence. Braeden took a recent one-month vacation, but has since rejoined the cast.

The Moustache faces a unique rival at this time in what are his twilight business years. New Nasty Nick (Joshua Morrow) founded Dark Horse to take out Newman Enterprises and has made quick progress on many fronts to achieve his ultimate goal. While father and son are likely to be hurt in this battle, only one man will emerge the victor (pun intended). November dealings will play into this soapy prophecy.

Neil (Kristoff St. John) will be hard-pressed to focus on the positives in his life this month. Hilary’s (Mishael Morgan) death continues to impact upon his stepson, Devon (Bryton James), Lily (Christel Khalil) was just moved to a faraway prison, and now, Ashley (Eileen Davidson) left a Dear John voice mail message for him before jetting to Paris, France. Will Neil find enough, or even something to be thankful for by Thanksgiving?

Mariah (Camryn Grimes) has a solid relationship with her mom and siblings. While GC Buzz is no longer featured prominently, the head hosting job Hilary left her provides current job security. However, unexpected major personal life trouble could well be bubbling.

Speaking of Mariah’s personal trouble… Tessa (Cait Fairbanks) surely looks guilty. Few viewers will be surprised if she’s revealed as being the coverup crew’s blackmailer. A recent tip jar scene at Crimson Lights appeared to be another money scam Tessa was pulling.

Unless Y&R is purposely distracting the audience, by setting Fairbanks’ character up as totally suspicious, Mariah will soon be devastated to learn that a person she’s grown to deeply care for is a manipulative fake.

Of course, other characters could have been mentioned as well. Readers are welcomed to respond to what’s been written and to also add their own speculative takes. CDL is a leading source for everything linked to The Young and the Restless. Check back regularly for Y&R spoilers and news!