BY Sean O'Brien on August 20, 2018 | Comments: one comment
Related : Soap Opera, Spoiler, Television, The Bold and the Beautiful 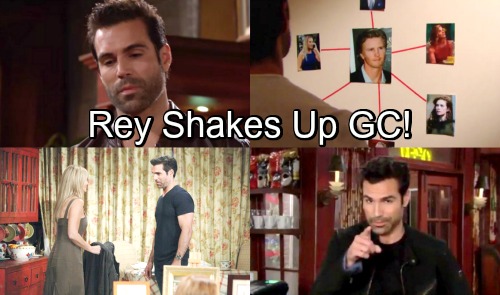 The Young and the Restless spoilers tease that Rey (Jordi Vilasuso) will make an impact in Genoa City. The new character’s professional work and personal appeal are sure to create reactions among Genoa City residents and their fans.

Rey begins by investigating the perceived disappearance of J.T. (Thad Luckinbill), which is actually an accidental death and illegal burial, as viewers know. How he determines what happened and then circles those involved appears to be the Columbo-like setup.

Television fans recall that Peter Falk’s classic lieutenant character (1968-2003) would investigate a crime that often led each mini-movie, or episode. The hook wasn’t whodunit, as that was known. Instead the thrill was in watching how Columbo determined who did it and then how he boxed-in the guilty.

Nikki’s (Melody Thomas Scott) Multiple Sclerosis fight has been highlighted recently. Her concierge doctor, Nate (Brooks Darnell), is concerned about her stress levels. Rey’s poke into the recent past is sure to send Nikki reeling.

Phyllis (Gina Tognoni) appointed herself as the fixer, as Nikki recently rehashed at Sharon’s bridesmaid party. Rey’s presence will eventually cause Phyllis stress as well. She feared that Paul (Doug Davidson) and Christine (Lauralee Bell), in particular, would use their rightful grudge against her to even the scales of justice.

Tenured Y&R fans recall that the original version of Phyllis (as played by Michelle Stafford) ran down Pristine with a car and never faced justice because her victims didn’t have the evidence needed to prove her guilt.

Vickie (Amelia Heinle) told Paul a fish story. In an effort to provide closure and give her coverup cohorts an out, Vickie told the chief that she helped J.T. escape town. Rey’s investigation will confirm otherwise, which would then place Vickie in serious legal jeopardy.

And then there’s Sharon (Sharon Case). This character has been rumored to be paired with Rey, eventually. That would be more likely to happen if Vilasuso’s character has frequent interactions with Sharon, which could easily lead to an involuntary information dump. A personal match might happen through various scenarios. Though Shick would likely end somewhere within that intertwined storyline.

According to projections, Rey will also be Arturo’s (Jason Canela) brother. If true, the addition of a new family in GC is significant. The Rosales’ contingent would represent a fully new direction for the show, which would create many implications for future arcs with legacy and existing characters.

Yes, Rey is about to make an impact in this fictional Wisconsin city. All the best is wished to Vilasuso, whose character should provide some welcome drama and intrigue. CDL is a leading source for everything linked to The Young and the Restless. Check back regularly for Y&R spoilers and news!