The Young and the Restless Spoilers: Rey’s Wife Confronts Sharon – Mia Wants Her Man Back 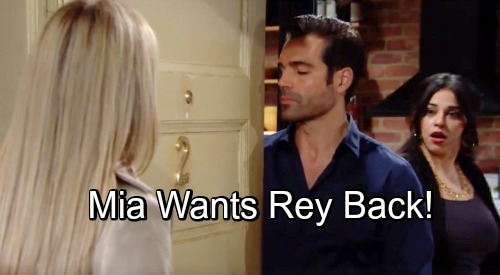 The Young and the Restless spoilers tease that Sharon (Sharon Case) will be on the receiving end of a fierce threat. She and Rey (Jordi Vilasuso) have been spending a lot of time together lately, and even though Sharon told Rey she wasn’t in the market for a new relationship right now, the two have gotten pretty close. They nearly kissed at one point, and there’s clear chemistry there.

Of course, Sharon’s got ulterior motives. Sure, she likes Rey and is attracted to him, but she also wants to find out the inside scoop on the J.T. (Thad Luckinbill) investigation. She’s partly working Rey, but there’s also a side of her that’s really into him.

But a new obstacle is about to get in between Sharon and Rey…Rey’s wife Mia (Noemi Gonzalez). Mia will be arriving on the scene soon, and it looks like she’ll be wanting to work things out with her estranged husband. Mia misses Rey, and she’ll let him know that, but he may not be as happy to see her as she is to see him.

One thing that Mia won’t be happy to see is the blossoming relationship between Sharon and Rey. It looks like she’ll pick up on Sharon and Rey’s mutual attraction fairly quickly, and she’ll get the jealousy bug. She won’t like it that someone else is interested in her man, and she’ll tell Sharon in no uncertain terms to back off.

But will Sharon back off? She probably won’t want to come between a husband and wife, even if they are estranged, especially after everything she’s been though with Nick (Joshua Morrow). Sharon and Billy (Jason Thompson) have been spending a little time together lately. Will Mia’s threat push Sharon in Billy’s direction?

Do you think Mia’s threat will put an end to the attraction between Sharon and Rey? Stay tuned to the CBS soap and don’t forget to check CDL often for the latest Young and the Restless spoilers, updates, and news.