BY Heather Hughes on November 29, 2018 | Comments: one comment
Related : Soap Opera, Spoiler, Television, The Young and the Restless 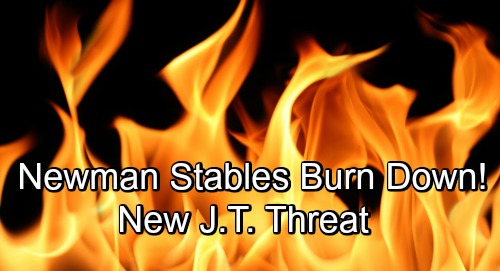 The Young and the Restless (Y&R) spoilers tease that Newman family chaos is about to erupt. Victoria (Amelia Heinle) stepped up to tackle the Tessa (Cait Fairbanks) threat, but the cover-up crew knows they’re not out of the woods yet. J.T.’s (Thad Luckinbill) body is still missing and they aren’t 100-percent sure of the motive behind that.

It’s reasonable to assume the person who moved it was trying to help. Victoria, Phyllis (Gina Tognoni) and Nikki (Melody Thomas Scott) wondered if maybe they were being protected. Of course, they have no guarantee. There’s always a chance someone out there is waiting for the perfect moment to strike and has some twisted goal in mind.

The Young and the Restless spoilers say even more drama’s to come. Sharon, Victoria, Nikki and Phyllis had better brace for trouble! Next week, a shocking discovery will be made. Y&R fans can expect J.T.’s old clothes to appear in Nikki’s bed. That’ll undoubtedly leave her creeped out and wondering what’s next. If the clothes are the same ones J.T. was buried in, that could mean the body mover was an enemy.

As if that wasn’t enough to deal with, the ranch will be targeted. The Young and the Restless spoilers say the Newman barn and stables will be set on fire. They’ll burn right to the ground, so the cover-up posse will fear the worst. These ladies will realize their secret could be in real jeopardy.

Will Tessa be blamed for this mess? It’s clear that Y&R intends on repairing the damage between Mariah (Camryn Grimes) and Tessa. If Mariah was going to dump her, she would’ve done it by now. The fact that Mariah’s torn means these two are going to sort out their problems – the main one being Tessa’s constant lying.

Naturally, that means Tessa will need a good dose of redemption. It’d actually be helpful for her to get accused and vindicated. Tessa needs some chances to tell the truth and show she can be a better person. The Young and the Restless has to rebuild trust, so having Mariah believe Tessa’s innocent of this is a great place to start. Mariah might have doubts initially, but she can get past them.

It makes zero sense for Tessa to be starting fires and planting J.T.’s clothes anyway. She wouldn’t be doing that when she wants to fix things with Mariah. Why stir the pot when Tessa needs this whole thing to blow over? There’s obviously a much darker force at work, so the girls’ night gang should be afraid – VERY afraid!