The Young and the Restless Spoilers: Stunning Twist Gets Nikki Off The Hook – J.T.’s Heart Issues Are True Cause of Death

BY Heather Hughes on April 24, 2018 | Comments: one comment
Related : Soap Opera, Spoiler, Television, The Young and the Restless 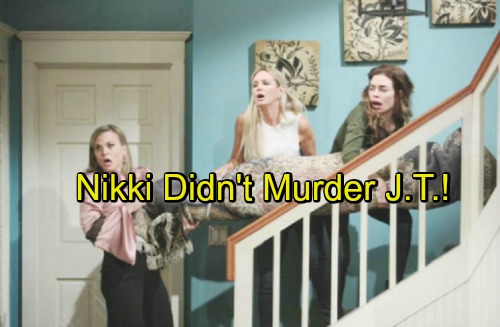 The Young and the Restless (Y&R) spoilers tease that some stunning twists are ahead in the J.T. (Thad Luckinbell) saga. He may be gone, but he’s certainly not forgotten. Victoria (Amelia Heinle), Phyllis (Gina Tognoni), Nikki (Melody Thomas Scott) and Sharon (Sharon Case) will continue to be haunted by the death cover-up. They’ll all face some struggles as they work to keep their secret.

Y&R fans know this crew is bound to get caught. They’re already acting nervous, so some crucial mistakes will be made soon enough. When four characters commit crimes together, you can bet someone will crack eventually. The Young and the Restless spoilers say someone will indeed make a confession, but will it be to Paul (Doug Davidson) or someone else?

Regardless, there’s no way Paul will be left out of the loop indefinitely. At some point, J.T.’s body will be discovered. Paul should be able to poke holes in the ladies’ stories, too. The GCPD usually has a hard time solving cases, but the facts tend to come out sooner or later. What will happen when Phyllis, Sharon, Victoria and Nikki are backed into a corner?

Nikki might try to take all the blame, but Victoria may not let her. It’s clear that Victoria feels guilty about letting this situation snowball. Phyllis pushed hard for a cover-up, so she may feel responsible for making things worse. Of course, Sharon will be caught in the middle of this mess as well.

Since disposing of J.T.’s body was a four-woman job, it sounds like they’re all going down. Even if Nikki accepts full responsibility, Paul will know she couldn’t have covered it up herself. He may misread what happened and arrest Nikki for attempted murder. The other women could be charged as accessories.

However, a looming shocker could get them all off the hook – at least on the murder charges. The Young and the Restless fans will recall that J.T. had a heart condition. He tried to brush it off as nothing, but it certainly seemed serious. Y&R never really got any payoff from reintroducing that plot point.

Why did they bring up J.T.’s electrocution and the fact his heart never fully recovered? There was surely a good reason for that. It could be what saves Nikki and the gang from a lengthy prison sentence. Nikki hit J.T. in the head with a fireplace poker, but she was surprised that it killed him. She didn’t think she’d hit him that hard.

The autopsy may back Nikki up on that. Perhaps that little whack on the noggin wasn’t what killed J.T. He was highly agitated right before he died, so his heart may have already been on the verge of giving out. You could argue that Nikki’s hit played a part in that, but J.T.’s heart issues may be enough to raise doubts about her guilt. Perhaps his own temper is really what led to his death.