The Young and the Restless Spoilers: Team Rey or Team Paul – Major Change In Genoa City – Who Do You Prefer? 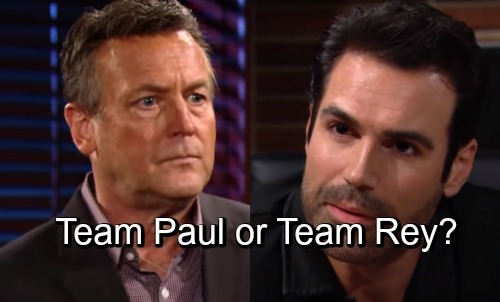 The Young and the Restless spoilers tease that Rey (Jordi Vilasuso) is here to stay now that Doug Davidson (Paul) appears to have left Y&R. Well, Davidson didn’t actually leave the show as will be detailed.

Davidson’s drop to recurring status in January wasn’t confirmed until earlier this month when the actor verified his status via social media. He was naturally emotional when sharing news about his employment status and stated that Paul was only scheduled to appear in two further episodes (which seemingly have since been seen). Davidson has been a part of Y&R’s cast since 1978 and for thirty-nine of those years had what’s known as a regular status contract. Recurring work is considered part-time.

Vilasuso is a soap veteran, having appeared on Guiding Light, All My Children, and Days of our Lives. His casting as Rey was significant, as it expanded the Rosales’ family. Arturo (Jason Canela), Rey’s brother, was introduced earlier this year. Lola (Sasha Calle), their sister, has now followed Rey.

It’s natural for longtime Y&R fans to feel for Davidson. He, like other tenured actors on this particular soap had established a niche and a bond with millions of fans. Many viewers who have been affected by the end of long-held job can surely relate to the sense of loss that Davidson has been forced to accept.

Regular viewers see that Rey appears to be positioned to take over for Paul at the Genoa City Police Department. Whether that happens suddenly and in an announce fashion is yet to be known. For the moment Rey’s duties are expanding because off-camera-Paul wants to get the most out of the detective the police commission assigned to handle the J.T. (Thad Luckinbill) case.

Sharon’s (Sharon Case) civilian addition to the station is a clear plot device that will allow Rey to have another character to play off in the work place. The college degree that Sharon earned in record time felt SORAS’d, a term that’s used to reflect the rapid aging of a character.

It will be interesting to see if Christine (Lauralee Bell) retains her recurring role, as she’s GC’s District Attorney and is Paul’s wife. As for Davidson himself, here’s hoping that Y&R has kept him on a recurring contract and will at least allow the audience to see his familiar face from time to time. Of course, Davidson’s desire to continue working under those terms would also be needed for the only and only Paul Williams to remain part of Y&R.

As a Y&R fan, whom would you prefer if you were running things – Rey or Paul? CDL is a leading source for everything linked to The Young and the Restless. Check back regularly for Y&R spoilers and news!