The Young and the Restless Spoilers: Three Reasons Why Jack and Victor Should Be Brothers 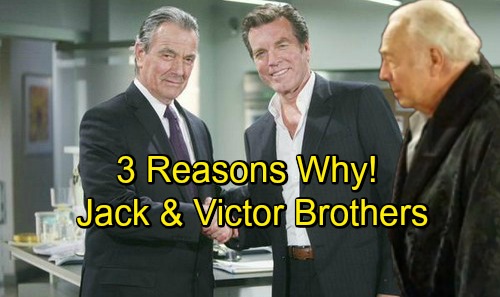 The Young and the Restless spoilers tease that Jack Abbott (Peter Bergman) could actually be Jack Miller, son of Albert Miller (George Kennedy). That would make this legacy character the blood brother of another, Victor Newman (Eric Braeden).

The time stamp on the black and white photograph Jack found in the safety deposit box months ago matches with the month Dina (Marla Adams) conceived her only son. Albert’s presence in that Genoa City country club photo, combined with the reveal Dina offered earlier this year about Jack not being John’s (Jerry Douglas) child makes this theory plausible.

Dina first discussed her enhanced romantic needs in the mid-1980’s, when Ashley’s (Eileen Davidson) paternity was switched from John to Brent Davis (Bert Kramer). Y&R revisited that decade’s old storyline by writing Dina back to town last year, which was a veiled establishment of Jack’s eventual arc.

Devoted fans confirmed that Albert was not Father of the Year material in the early part of the last decade when Victor visited him in a rest home. Albert’s vile verbal treatment of the son he abandoned provided an entirely new wrinkle to Victor’s backstory. Nick (Joshua Morrow) was present and felt sorrow for his father, a point he’s apparently since forgotten.

Considering that Albert was cold-hearted, having left both of his young sons, which includes Matt Miller (Robert Parucha), leads one to believe that he would have fooled around with John’s wife. Dina either never sought to know that Albert was Jack’s biological sire, or could have been rebuked by him when sharing the news. In either instance, she seemingly chose to allow John to believe that Jack was his son.

The third reason, among many, why Jack and Victor could be brothers involves the other side of the screen. The actualization of this particular storyline would generate significant buzz. In fact, it already is.

Victor and Jack have been battling for decades. The bitterness of their feud would make deeper sense if it turns out they were tied to Albert. The previously inexplicable nature of their ongoing personal debate would be explained as part of a standard sibling rivalry.

Y&R would establish a number of fluid plot paths that could be explored indefinitely. That is the basis of any considered major revision of any character’s history. In this case two major character’s backstories would be permanently altered.

Some fans would cry foul, loudly, on social media. Others would be up for the revamp. But both contingents would be watching and on that ratings point alone, this paternity switch trigger could be pulled, if Y&R so dares.