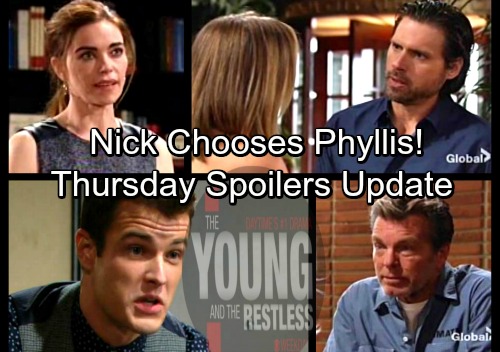 The Young and the Restless (Y&R) spoilers for Thursday, April 5, tease that Kyle (Michael Mealor) will visit Jack (Peter Bergman) to offer reassurance. He’ll insist that Jabot’s in good hands, but Jack will still have concerns. He’ll contend that Kyle shouldn’t get used to being in charge.

Elsewhere, Phyllis (Gina Tognoni) will gripe about Kyle taking over. When Billy (Jason Thompson) suggests that he could step up instead, Phyllis will be on board with the idea. They’ll discuss how Ashley (Eileen Davidson) would rather see Billy on the throne than let Kyle wreak havoc.

Later, Phyllis will drop by to see Jack. She’ll want him to know they have a strategy in motion to stop Kyle. Phyllis will once again promise that Jack’s going to be cleared. However, she’ll agree to fill in for him on Nick’s (Joshua Morrow) project in the meantime. 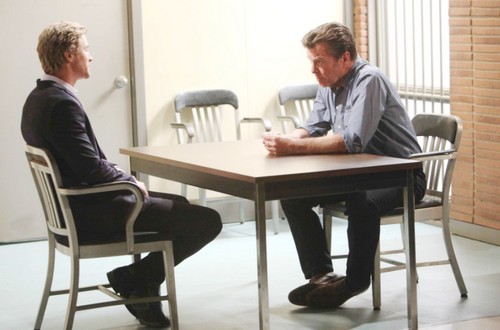 Speaking of Nick, he’ll lash out at Sharon (Sharon Case) on Thursday’s Y&R episode. Sharon will try to support Nick as he deals with Victor’s (Eric Braeden) health woes, but he’ll just get irritated. The Young and the Restless spoilers say Sharon will seem hurt, so Nick will soften and give her apology.

Afterward, Nick will let his guard down with Phyllis. He’ll be worried that Victor could actually die. Phyllis will insist that it’s OK for Nick to show some vulnerability. He’s dealing with a lot right now, so he doesn’t have to put on a brave face.

Back with Sharon, she’ll debate her reunion hopes with Mariah (Camryn Grimes). Sharon won’t be sorry that she’s been growing closer to Nick. She’ll think they have a lingering spark. At Jabot, Abby (Melissa Ordway) will grill Kyle about the secrets he’s been keeping. She’ll think it’s odd that she’s been corresponding with Victor, but he’ll act like it’s no big deal.

When Ashley and Billy show up, they’ll argue that a change in leadership is necessary. Ashley will want to appoint Billy as CEO, but Kyle will nix that plan. He’ll vow to prevent Ash and Billy’s attempts to push him out. Back in the jail visiting area, Jack will meet with J.T. He’ll rant about how some coward is letting him take the blame for Victor’s suffering. J.T. will fib about wanting Jack exonerated.

Other Young and the Restless spoilers say Victoria (Amelia Heinle) will stop by to see the marriage counselor alone. She’ll have a few things she needs to get off her chest. During their conversation, Dr. Mosley (Rose Abdoo) will focus on a pattern. Victoria will realize the doc sees some similarities between Victor’s controlling nature and J.T.’s abuse.

However, Victoria will argue that dealing with J.T. is much different. She’ll admit she had to cover up bruises, which really rattled her. Victoria will also talk about how she’s exhausted by all of this. She feels like she has to tiptoe around to avoid J.T.’s outbursts.

Dr. Mosley will wonder what’ll happen if something doesn’t give. She’ll ask if Victoria can see herself staying in this environment. A little later, Victoria will daydream about dumping J.T. She’ll seem like she’s considering it, but J.T. will reel her back in with apologies and praise at home.

J.T. will tell Victoria how much he loves her as they sink back on the couch for sex. Victoria’s in for a rude awakening soon, so stay tuned for all the drama. We’ll give you updates as other Y&R news comes in. Stick with the CBS soap and don’t forget to check CDL often for the latest Young and the Restless spoilers, updates and news.