BY Heather Hughes on June 20, 2018 | Comments: one comment
Related : Soap Opera, Spoiler, Television, The Young and the Restless 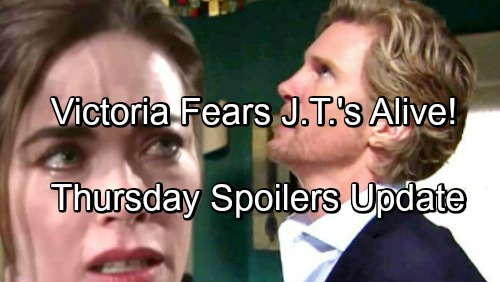 The Young and the Restless (Y&R) spoilers for Thursday, June 21, tease that Ashley (Eileen Davidson) will get the scoop on Newman’s threat. She’ll look through the confidential info that was delivered and mull everything over with Victoria (Amelia Heinle). When Victoria wonders if Jack (Peter Bergman) might be involved, Ashley will suggest that he’s too busy with his father hunt.

However, Ashley will call Jack just to be sure. She’ll drop a hint about Jack’s potential involvement, but he’ll note that Ashley has no reason to worry. The Young and the Restless spoilers say Jack’s Chancellor mission will press on. Unfortunately, Cane (Daniel Goddard) won’t be willing to help him. He’ll shut down the idea of asking Jill (Jess Walton) to exhume Phillip’s (Donnelly Rhodes) body.

Cane will also have concerns about Jack’s motives. He’ll fear that the non-Abbott’s coming for Chancellor Industries, but Jack will insist that’s not true. Next, Jack will discuss his suspicions with Billy (Jason Thompson). Y&R spoilers say Billy won’t see the point of all this since Phillip’s dead.

Jack will mention that he might’ve inherited some health issues. His choice of words will raise red flags for Billy. When Billy notes that Jack might want to inherit something else, Jack will deny it. He’ll maintain that this isn’t about taking over Chancellor, but Billy will be done with this conversation. Meanwhile, Cane will assure Neil (Kristoff St. John) that he’s prepared for war!

Over with Abby (Melissa Ordway) and Arturo (Jason Canela), their close moment will be interrupted. After Summer (Hunter King) appears, Abby will tell her to get lost. She’ll also dismiss Victoria’s attempt to summon her.

Later, Abby will get an invitation to Nick’s (Joshua Morrow) party. She’ll wonder what it’s all about before heading home with Arturo. While Arturo’s out of the room, Abby will find a bra on his couch and bolt. She’ll clearly be worried about Arturo sleeping around, but maybe she should get the whole story first.

Back with Victoria, she’ll consider some potential Newman risks. Ashley will chime in with her own suggestions. They’ll run down their list, which includes Kyle (Michael Mealor), Helen (Sitara Hewitt) and Nick.

Victoria will also offer Abby as a possibility, but that won’t please Ashley. The Young and the Restless spoilers say Ashley will bring up Victoria’s previous transgressions. She’ll contend that Victoria isn’t above framing someone.

However, they’ll ultimately realize the document dates match up with J.T.’s (Thad Luckinbill) Newman stint. A little later, another email will come through. The distorted voice will reiterate his or her threat and urge the Newman team to sleep tight. Victoria will secretly worry that J.T.’s still alive, but someone like Mac (Kelly Kruger) might be a better option.

After Billy slams the door at the apartment, Summer will playfully question his bad mood. Billy will once again point out that he’s with Phyllis (Gina Tognoni), who happens to be out of town at the moment. Afterward, Summer will call some friends over for poker. She’ll badger Billy until he finally caves in and joins the game.

Since Billy has battled a gambling addiction in the past, he’s playing with fire! This could turn out to be an extremely dangerous secret. We’ll give you updates as other Y&R news comes in. Stay tuned to the CBS soap and don’t forget to check CDL often for the latest Young and the Restless spoilers, updates, and news.