The Young and the Restless Spoilers: Thursday, May 10 – Ashley Finds Stunning Evidence – Hilary and Abby Go To War

BY Heather Hughes on May 8, 2018 | Comments: 2 comments
Related : Soap Opera, Spoiler, Television, The Young and the Restless 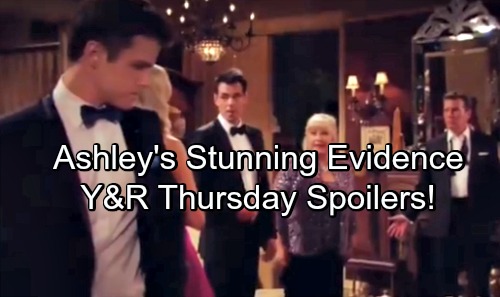 The Young and the Restless (Y&R) spoilers for Thursday, May 10, tease that Jack (Peter Bergman) will find himself in need of a friend. Thanks to all the paternity drama, Jack will be in a dark place. He’ll want to open up to someone, but he’ll probably feel like his family’s too close to the situation. It may be easier to Jack to confide in a supportive outsider, so that’s where Neil (Kristoff St. John) will come in.

Jack will unload all his feelings and hopefully get some comfort in return. Neil will undoubtedly pass along his words of wisdom to get Jack through this. Y&R fans know Neil’s one of the best advice-givers in town, so Jack should feel a little better once they talk.

Meanwhile, Abby (Melissa Ordway) and Hilary (Mishael Morgan) will face off. It looks like they’ll both poke their noses where they don’t belong. The Young and the Restless spoilers say there’ll be a lot of pushed buttons and hurled insults.

If Abby gets updates on Hilary’s brief pregnancy deception, you can bet she’ll throw it in Hil’s face. Abby may even suggest Hilary’s not cut out for motherhood. Of course, Abby’s family is stuck in major turmoil right now. There’ll be opportunities for Hilary to fire back and hit where it hurts. The Young and the Restless fans will want to tune in for these tense scenes.

Elsewhere, Ashley (Eileen Davidson) will stumble across some stunning information. She’ll learn something about Kyle (Michael Mealor) that seems awfully incriminating. Ashley will likely believe Kyle’s responsible for the altered film. She may think Kyle found out about Jack’s paternity and set all this up to hurt him.

The Young and the Restless spoilers say a confrontation could be coming up soon. Ashley may show off the evidence and demand some answers. Then again, Ash might try a sneakier tactic to expose Kyle’s manipulation. Regardless, Ashley will believe Kyle’s guilty and she’ll want to make him pay!

It looks like the excitement’s revving up in Genoa City. We’ll keep you posted as other Y&R news emerges. Stick with the CBS soap and don’t forget to check CDL often for the latest Young and the Restless spoilers, updates, and news.