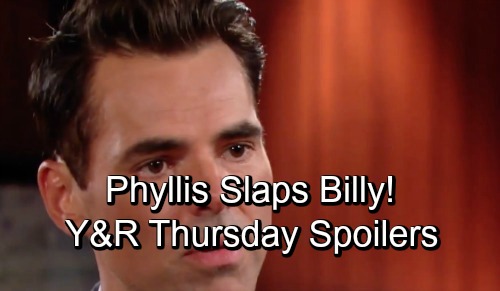 The Young and the Restless (Y&R) spoilers for Thursday, October 18, tease that Nate (Brooks Darnell) will get some appalling news. He’ll find out that Cane (Daniel Goddard) decided to bail on his usual visit with Lily (Christel Khalil). Cane had a rough time during his last chat with his wife. He wants to support Lily through her crisis, but it’s hard to see her in such a dark place.

Of course, Nate will think Cane needs to suck it up and be there for Lily. She’s the one who’s truly suffering right now, not Cane. Nevertheless, it looks like Cane will have other plans in Thursday’s episode. Nate won’t want Lily to be all alone, so he’ll choose to pay her visit instead. It couldn’t hurt to see another friendly face.

Once they sit down together, Nate offer some supportive words. The Young and the Restless spoilers say Lily will be discouraged as usual, but Nate won’t want her to lose heart. This it just a temporary situation. It may not feel like it right now, but Lily will get through this and move on with her life. Nate will push Lily to keep her chin up and focus on getting through the rest of her sentence.

Unfortunately, an escape plot’s brewing. Lily will come up with a getaway plan on next week’s new Y&R episodes, October 22-26, so that can’t be good. In the meantime, Phyllis (Gina Tognoni) will unleash her wrath. On Wednesday, Billy (Jason Thompson) reveals that he had sex with Summer (Hunter King) just to get back at her mother. His admission will infuriate Phyllis and leave Summer deeply distraught.

Phyllis will unload all her anger and slap Billy as hard as she can. She wanted to repair the damage between them, but not anymore. It sounds like Phyllis will be ready to declare war instead. Y&R fans won’t want to miss Thursday’s explosive confrontation.

Summer will get caught in the conflict, but she’ll eventually slink away in despair. She’ll end up tracking down Kyle (Michael Mealor), who’ll be on a double date with Lola (Sasha Calle), Mariah (Camryn Grimes) and Tessa (Cait Fairbanks). Naturally, Summer will pout and whine until Kyle steps away to comfort her. It’ll leave Lola feeling jilted, so she’ll just walk right out the door!

Kyle will be stuck between his old love and his new love, so stay tuned to see what he’ll do. The Young and the Restless viewers won’t want to miss the twists and turns ahead. We’ll give you updates as other Y&R details emerge. Stick with the CBS soap and don’t forget to check CDL often for the latest Young and the Restless spoilers, updates and news.