BY Heather Hughes on December 17, 2018 | Comments: one comment
Related : Soap Opera, Spoiler, Television, The Young and the Restless 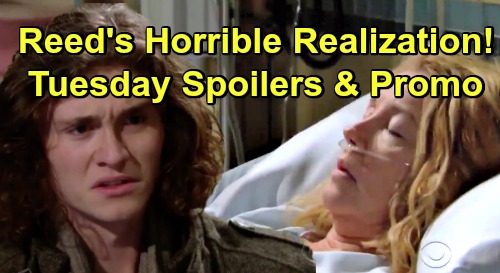 The Young and the Restless (Y&R) spoilers update and recap for Tuesday, December 18, tease that Charlie (Noah Alexander Gerry) and Reed (Tristan Lake Leabu) will mull over the night’s events. They’ll discuss the dent in the car and ponder what caused it, but Reed will think it’s best to let it go. He’ll advise Charlie to get some sleep and head home to do the same.

Later, Cane (Daniel Goddard) will corner Charlie and smell beer on his breath. He’ll get Charlie to confess that Shauna (Camryn Hamm) dumped him, but the teen will insist he didn’t drive drunk. That’s technically true, but Charlie won’t be giving Cane the whole story either!

At the hospital, Nate (Brooks Darnell) will spot Nikki (Melody Thomas Scott) and learn she’s a hit-and-run victim. He’ll urge an unconscious Nikki to keep fighting as he gets to work. Over with Billy (Jason Thompson) and Victoria (Amelia Heinle), they’ll be chatting at her place when Reed arrives. He’ll scramble upstairs as he rants about a lame party.

Victoria will express concern over Victor (Eric Braeden) being MIA as well as her son’s difficulties. She’ll want to make the end of the year a little brighter for Reed, so Billy will agree to pitch in. They’ll shift the conversation to Phyllis (Gina Tognoni) and business before a stunning phone call comes in.

Billy and Reed will rush to the hospital while Reed gets a text in bed. Charlie will send Reed a message about Cane scolding him for drinking. He’ll bring up the incident on the road again, but Reed won’t want to go back out there.

At Nick (Joshua Morrow) and Phyllis’ house, they’ll talk about the successful Jabot shindig and admire each other’s ambition. Nick will also want Phyllis’ take on Billy and Victoria. He’ll worry that Billy’s using her, but Phyllis will think Victoria can watch out for herself. She’ll note that she’s happy, so she’s fine if Billy and Victoria find happiness, too.

Next, Nick will get updates on Nikki’s accident by phone. He’ll tell the person on the other end that he’s on his way. At the Abbott mansion, Jack (Peter Bergman) will kiss Kerry (Alice Hunter) under the mistletoe again. They’ll end up discussing Jack’s past with Phyllis and how Billy fits in it. After Jack assures Kerry that it’s all behind him, he’ll learn that Nikki’s in the hospital and head right over.

In the hospital waiting area, Nick will rant about wanting the person responsible behind bars. Y&R spoilers say he’ll eventually settle down and attempt to reach Summer (Hunter King). Over with Kerry, she’ll be taken aback to learn Jack was once married to Nikki. Kerry will seem concerned that Jack’s had so many wives, but she’d better get used to that if she wants a man in this town!

Once Billy leaves the next morning, he’ll fill Reed in on Nikki being hospitalized. After getting confirmation on the hit-and-run, a panicked Reed will call Charlie with awful news. He’ll insist that they hit Nikki on the road last night, so this Young and the Restless drama will heat up.

Back with Nate, he’ll offer some details to Victoria and Nick. Nate will explain that Nikki’s spleen was removed and add that there was a high amount of alcohol in her system. The Young and the Restless spoilers say Nikki’s family will fret over this serious situation, but they’ll try to hold out hope.

It looks like some gripping scenes are coming up. We’ll keep you posted as other Y&R info emerges. Stay tuned to the CBS soap and don’t forget to check CDL often for the latest Young and the Restless spoilers, updates and news.