The Young and the Restless Spoilers: Vickie Must Lie to Reed – J.T.’s Murder Haunts Genoa City

BY Sean O'Brien on April 21, 2018 | Comments: one comment
Related : Soap Opera, Spoiler, Television, The Young and the Restless 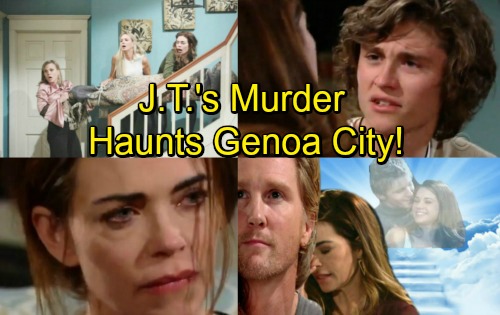 The Young  and the Restless spoilers tease that Vickie (Amelia Heinle) must lie to her son. Reed (Tristan Lake Leabu) can’t be told what actually happened to his father. Instead, his mom must stick to her story about why J.T. (Thad Luckinbill) left town.

Part of what Reed has been told is true. Yes, his dad attacked Victor (Eric Braeden) and left him for dead. Then, he ran off. But J.T. didn’t leave town a few days ago because of that incident, as Vickie and her accomplices know so well.

Actually, J.T. pushed for an instant family vacation to Hawaii. Vickie was oddly on board with that, even though Victor was in the hospital. Seasoned soap fans recognized that plot point as a weak spot in the storyline.

There actually is no choice now. Vickie became involved in a confrontation in her bedroom. Why she chose to not scream for help, or run downstairs when J.T. first cornered her after entering the house through the garage roof, will remain logically debatable. Some say victims don’t deserve to be second-guessed. This scribe agrees. At the same time, he also believes Y&R was forcing various elements of the script in order to engineer its desired outcome. A picky set of points, but also ones that are reasonable to state.

The ugly truth is that Reed lost his father because J.T. had spun so far out of control that Nikki (Melody Thomas Scott) was forced to act in defense of her daughter. Phyllis’ (Gina Tognoni) persuasive paranoia then pushed Vickie, Nikki and Sharon (Sharon Case) to go along with a coverup plan. A skilled police force would have confirmed the facts, thereby vindicating Nikki’s actions. But Y&R, like other agenda-driven television shows, chooses to believe that the law should be portrayed as questionable, while certain subjective violent actions receive minimal scrutiny.

It seems certain that Vickie’s lies will eventually be revealed. She didn’t want J.T. to die, but he did. Reed’s mother helped to cover that up and then didn’t tell him the truth about what happened. This seeming eventuality leads fans to conclude that’s why Leabu is being written off the show within the next month, as has been the buzz.

This type of relationship tear doesn’t mend in days, weeks, months, or even years. If Reed comes back some day it will likely be with a grudge against the woman he used to love, but was betrayed by. She didn’t take his father. Reed’s grandmother, a three-time killer, did that instead.

J.T.’s presence lingers, even though he’s lying in an unmarked grave in Chancellor Park. The lives of those who loved him are now impacted, Vickie and Reed most especially. CDL is a leading source for everything linked to The Young and the Restless. Check back regularly for Y&R spoilers and news!