BY Kinsley Goldman on June 5, 2018 | Comments: one comment
Related : Soap Opera, Spoiler, Television, The Young and the Restless 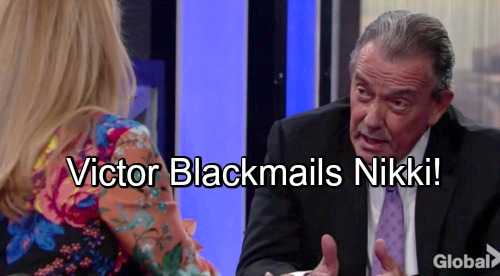 The Young and the Restless (Y&R) spoilers tease that Victor (Eric Braeden) has even more surprises in store. He’s already been shaking things up for Victoria (Amelia Heinle) and Nick (Joshua Morrow). It looks like Nikki (Melody Thomas Scott) could be the next Newman to face a startling betrayal.

Victor is quickly proving that he’s the same man he’s always been. His near-death experience obviously didn’t change him a bit. Now that Victor has his strength back, he’s more ruthless than ever! In Tuesday’s episode, Victor announces that he’s suing for full custody of Christian (Jude and Ozzy McGuigen). How can Nikki sit back and do nothing after Victor’s cruel move?

Nikki’s clearly the kind of gal who would do anything to protect her kids. After all, Nikki killed J.T. (Thad Luckinbill) to protect Victoria. She’ll surely stand up to Victor for trying to take Nick’s boy away from him. Biology doesn’t matter here. Nick and Christian have formed a bond as father and son, so Victor has no right to swoop in and separate them.

If Nikki is anything other than outraged, it would be an epic error on Y&R’s part. She needs to confront Victor about how far he’s going to prove a point. It’s not like Victor’s going to be around forever. Newman will surely need a new CEO before Christian’s old enough to take the lead. Plus, Christian needs a hands-on dad who’ll be there for many years to come.

Victor’s list of crimes doesn’t help his case. It just doesn’t make sense for Victor to seek custody and Nikki will likely say so. She may side with Nick and vow to go against Victor in court. Nikki might even threaten to leave Victor again if he keeps pursuing this. She puts up with a lot, but she tends to draw the line when it comes to hurting her children.

That’s when Victor could stun Nikki with another major secret. It’s been a while since the J.T. storyline caused drama. We’re due for some more cover-up chaos! The Young and the Restless spoilers say a huge twist will change everything soon, so this could be it. Does Victor know all about what Nikki and the other girls’ night guests did? If so, Victor will have serious ammunition to keep Nikki in line.

The Young and the Restless spoilers also say Nikki will get blackmailed later this week. Victor could easily drop the J.T. bomb and demand Nikki’s support in the custody battle. Could this be what ultimately brings the truth out in the open?

Nikki may let Victoria, Phyllis (Gina Tognoni) and Sharon (Sharon Case) know what’s happening at some point. Any of them could come forward to make Victor lose his leverage with Nikki. It’d be a creative way for the J.T. mayhem to finally explode.

Y&R fans won’t want to miss all the shockers ahead. We’ll give you updates as other news comes in. Stay tuned to the CBS soap and don’t forget to check CDL often for the latest Young and the Restless spoilers, updates, and news.