BY Heather Hughes on November 15, 2018 | Comments: one comment
Related : Soap Opera, Spoiler, Television, The Young and the Restless 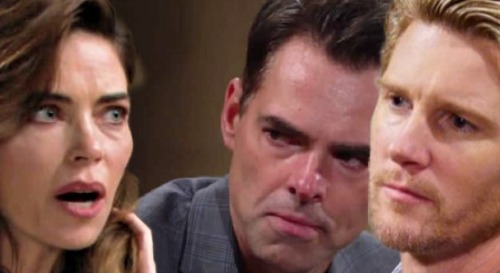 The Young and the Restless (Y&R) spoilers tease that Victoria (Amelia Heinle) will near her breaking point. She’s come close to cracking several times thanks to all the J.T. (Thad Luckinbill) pressure. Nate (Brooks Darnell) has been awfully nosy, but Victoria’s managed to keep him in the dark so far. She’s also done her best to handle Rey’s (Jordi Vilasuso) questions, but she’s had some slipups along the way.

As Rey closes in on the truth, Victoria will be on edge. Nikki (Melody Thomas Scott) will hold out hope that things will work out, but Victoria won’t be so sure. Although Victoria’s got the rest of the cover-up crew on her side, that’s not real support. They all spend more time fighting than they do actually accomplishing anything. Plus, their meetings have only managed to create more suspicions.

The Young and the Restless spoilers say Victoria will want someone she can truly rely on. She’ll feel distraught and alone, so she’ll seek out a familiar face for comfort. Y&R fans can expect Billy (Jason Thompson) to step up for his ex. He’ll realize Victoria’s hurting, so he’ll want to help if he can.

Billy and Sharon (Sharon Case) have been hanging out lately, but it’d doubtful the show will do much with that. Sharon and Rey seem to be the couple they want us to root for. Billy’s friendship with Sharon is fun, but he’ll probably reunite with Victoria at some point. He talked about how much Victoria means to him not too long ago, so the next phase of this plot will play that up.

Victoria may blame her jumpiness and pain on J.T. trauma, but will Billy buy that? He knows Victoria far better than Nate or almost anyone else in Genoa City. Billy may sense that Victoria’s holding back. Will he pry the truth out of her? Could Victoria finally blurt out the whole story and make Billy a secret-keeper?

It’s not a good idea to expand the circle, but at least Victoria would feel better. This is eating her up inside, so she could really use somebody to talk to. By letting Billy in on something so huge, it could push their reunion forward in a big way. You don’t share a deadly secret with just anyone! It’d show Victoria trusts Billy, which could set up a growing bond.