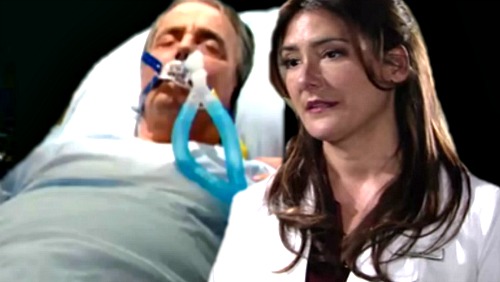 The Young and the Restless (Y&R) spoilers tease that Victor’s (Eric Braeden) mysterious visitor will lurk in town. A dark-haired woman recently appeared in Victor’s hospital room and gave him a kiss on the hand. Naturally, Y&R fans are wondering who this mystery lady might be.

Thanks to a couple of Instagram posts, we know who’s playing this character. Alyssa London revealed that she played a featured extra listed as “mystery woman” in the script. She booked a two-day gig and added that her lovely locks are what won her the role.

“I’ll never forget it and am grateful for the experience and to my hair for getting me there,” London said. So what conclusions can we draw from London’s tidbits? She made it clear that this is a minor part, which is interesting since this woman appears to have such a strong connection to Victor.

The Young and the Restless is going to need more time to explain this. That means that London is a stand-in for someone else who’s coming. The fact that her hair was so important is another clue. Y&R obviously had a very specific look in mind for this part. They probably had to get it right since it’ll need to seem similar to another actress’ locks later.

From the back, London could easily pass for a former flame of Victor’s. The mystery woman kissed Victor’s hand, so that lines up with the old lover idea. Is this supposed to be Dr. Meredith Gates (Alicia Coppola)? Y&R viewers will recall that Meredith was the doc during Victor’s prison stint. He made many trips to the clinic and the two started a hot fling.

Of course, Meredith eventually realized that Nikki (Melody Thomas Scott) was Victor’s soul mate. Despite her great love for him, Meredith had to take a step back. Maybe Meredith heard about Victor’s assault on the news and just had to come see him. Victor’s been near death, so Meredith may have thought she needed to stop by and say her goodbyes.

If Coppola wasn’t available right away, London would’ve been an easy alternative to set things up. It’s common for soaps to use stand-ins when faces aren’t revealed at first. If this woman later turns out to be Meredith, The Young and the Restless has the perfect opportunity to insert her in the story. Nikki’s had her fun with Arturo (Jason Canela), so Victor deserves a side chick!

Do you think Victor and Meredith could reconnect? Will this serve as another obstacle for Nikki and Victor’s relationship? We’ll give you updates as other Y&R details emerge. Stay tuned to the CBS soap and don’t forget to check CDL often for the latest Young and the Restless spoilers, updates and news.

Here’s the clip from @youngandrestlesscbs today! Told you I got hired for my hair 😆That was so sweet of my mom, Dad and my twin siblings @kellenlondon and @elondon_ to all sit together and watch for my part. Listen for my mom being adamant that she knows my hands 😂 Not a bad little cameo for a first audition and a first minor part. Victor (or Eric in real life) who I got to know in hair and makeup and in this scene asked me what ethnicity I was right after I introduced myself. I told him I have Heritage from European and Tlingit, an Alaska Native, Tribe. He laughed and said, “only in America.” He is from Germany. Also happy birthday (today) to him! Thank you @cbsdaytime @youngandrestlesscbs for this opportunity! #MysteryWoman #youngandtherestless