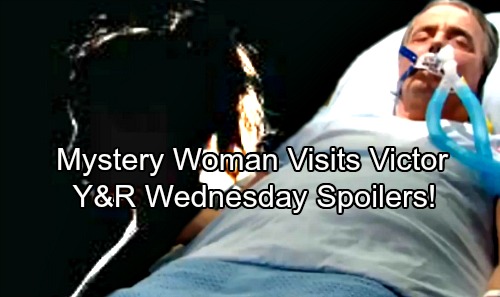 The Young and the Restless (Y&R) spoilers for Wednesday, April 4, tease that Victor (Eric Braeden) will have an unexpected visitor. Earlier reports pointed to this mysterious person’s arrival, but we now know more info. It turns out it’ll be a female who stops by comatose Victor’s room.

So who is this mystery woman? Since Victor may be lingering between life and death, it might be someone who’s already passed on. Y&R might include someone from Victor’s history. However, there are other options for this intriguing twist. Could Melissa Claire Egan have filmed an extra scene or two as Chelsea?

It’d be awfully risky for Chelsea to appear in Genoa City again, but you can never rule anything out on the CBS soap. Whatever happens, The Young and the Restless spoilers say some hot drama’s brewing. In the meantime, Abby (Melissa Ordway) will also encounter someone a bit mysterious. She’ll meet a stranger that she finds quite attractive.

Will Abby decide to approach this hunk and fish for a date? She could use a new love interest, so that seems like a good idea. The Young and the Restless will undoubtedly want to pair Abby up with somebody soon, so they might as well introduce a new option.

Of course, Abby should be careful about trusting this guy. Zack (Ryan Ashton) had plenty of secrets and this stranger may have something to hide, too. Elsewhere, Kyle (Michael Mealor) will feel confident about the future. He takes over at Jabot on Tuesday, Apreil 3, so Wednesday’s episode could bring some changes. Kyle will settle as the company’s leader and do pretty much anything he pleases.

It looks like Kyle will get comfortable at the Abbott mansion as well. Ashley (Eileen Davidson) will do her best to keep an eye on him and she may urge Abby to do the same. It’s clear that Kyle has some sneaky plans in motion. He was in cahoots with Victor long before Jack ever found the proof.