The Young and the Restless Spoilers: Wednesday, May 23 Update – Jack and Kyle Plot Billy’s Downfall – Sharon and Nick Battle

BY Heather Hughes on May 22, 2018 | Comments: Leave Comments
Related : Uncategorized 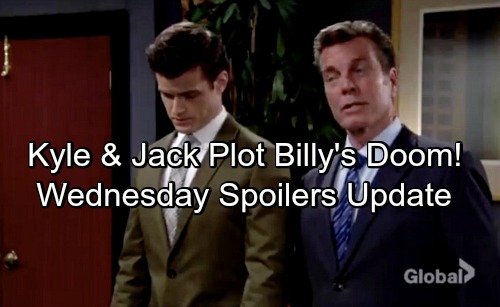 The Young and the Restless (Y&R) spoilers for Wednesday, May 23, tease that Billy (Jason Thompson) will push for changes at Jabot. He’ll start by making plans for a window between his office and the reception area. Billy will hope to create an open environment like the one John (Jerry Douglas) used to shoot for. He’ll hope for other company shifts that can propel Jabot into the future.

Gloria (Judith Chapman) will feel caught in the middle of Jack (Peter Bergman) and Billy’s (Jason Thompson) drama. She’ll urge Billy to find a solution, but he’ll think Jack’s still in denial. Since Jack and Kyle will be sharing an office from now on, that certainly won’t ease the tension.

Billy will talk to Phyllis (Gina Tognoni) about his growing fears. He’ll worry that this could destroy all the progress he’s made with Jack. Meanwhile, Kyle will reassure his dad. He’ll insist that Billy will screw up like he always does and that’ll give them a chance to swoop in. Kyle will predict that Jack’s going to be CEO again and he’ll be second-in-command as his son.

Back at Jabot, Jack will try to patch things up with Billy. It’ll work out best for his takeover plot. Nevertheless, Billy and Jack will end up sparring over the company’s direction. At home later, Jack will tell Kyle this is going to be difficult. He’ll need some creative strategies to sink Billy ASAP.

At Sharon’s (Sharon Case) place, she’ll bicker with Nick (Joshua Morrow) about Victor’s (Eric Braeden) offer. Sharon will fret about Nick getting sucked back into Vic’s web. Nick will understand Sharon’s concerns, but he’ll think he can handle his dad this time around. Y&R spoilers say Nick will want to carry on Victor’s legacy and make this reconnection with his father stick.

Sharon will try to get Victoria to back her up, but that plan will fall flat. Victoria will love the idea of having Nick on her side. She’ll think it could be useful since she’s constantly taking on Ashley (Eileen Davidson). Plus, Nick will have more on his plate and less time for his J.T. (Thad Luckinbill) investigation.

Other Young and the Restless spoilers say Abby (Melissa Ordway) will help Arturo (Jason Canela) pick out a new suit. He’ll need it for a ritzy fundraiser. Abby will eventually get a call from her sister. Victoria will want Abby to speak with Nick and convince him to rejoin Newman.

Naturally, Abby will refuse to offer support. This would just bump her down Victor’s list of respected Newmans. Victoria will make her way over to Sharon’s house to continue their discussion. Nick, Sharon and Victoria will all weigh in with their views. In the end, it looks like Nick will still be leaning toward a new beginning at the family company.