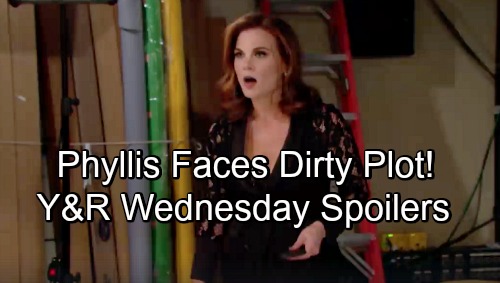 The Young and the Restless (Y&R) spoilers for Wednesday, November 14, tease that Billy (Jason Thompson) will seek another round of payback. After Phyllis (Gina Tognoni) betrayed him with Nick (Joshua Morrow), Billy sought his initial revenge by sleeping with Summer (Hunter King). Now that Nick and Phyllis are flaunting their new romance, Billy will decide to kick things up a notch.

Of course, this both personal and professional. Phyllis also snatched up the CEO seat and intends to steal the spotlight at the Jaboutiques launch bash. Billy’s the one behind the idea for those boutiques. He shot down the naysayers and took risks to make them happen, but Phyllis is taking all the credit.

As a result, Billy will come up with a plan to cause pain. He’ll settle on Sharon (Sharon Case) as the perfect plus one for this big event. When Billy approaches Sharon with the idea, she’ll initially balk. However, Billy will keep at it and Sharon will get on board later this week. These two will hope to stir up plenty of jealousy and rage.

In the meantime, Rey (Jordi Vilasuso) will get a shock. The Young and the Restless spoilers say Mia (Noemi Gonzalez) will do something quite unexpected. It looks like her next move could lead to a heated confrontation. Rey and Mia will definitely have a blowup at the party on Thursday’s new Y&R episode, November 15, so stay tuned for some hot drama.

Other Y&R spoilers say Kyle (Michael Mealor) will consider his options. Billy wasn’t keen on playing dirty, but Kyle won’t see any other choice. He’ll choose to do something sneaky and hopefully set Phyllis up to fail. Kyle wants Phyllis off the Jabot throne as soon as possible, so he’ll do whatever it takes to make that happen.

The Young and the Restless spoilers hint that Kyle could hit some snags along the way, so Phyllis may be a tougher opponent than he anticipated. His plan just might backfire if he’s not careful! Are you rooting for Kyle or you on Phyllis’ team? We’ll give you updates as other Y&R news comes in. Stick with the CBS soap and don’t forget to check CDL often for the latest Young and the Restless spoilers, updates, and news.