BY Heather Hughes on November 13, 2018 | Comments: one comment
Related : Soap Opera, Spoiler, Television, The Young and the Restless 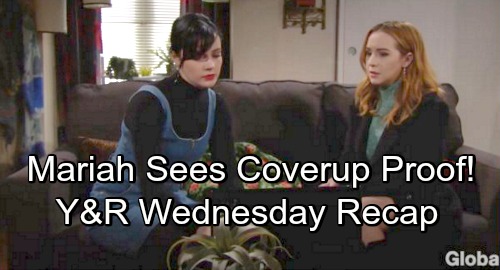 The Young and the Restless (Y&R) spoilers for Wednesday, November 14, tease that Rey (Jordi Vilasuso) will keep digging for J.T. (Thad Luckinbill) answers. At the police station, Michael (Christian LeBlanc) will be there to help Victoria (Amelia Heinle) handle Rey’s questions. Rey will wonder how Victoria knew about the watch, but she’ll point out that Abby (Melissa Ordway) filled her in.

Talk will quickly turn to the DNA. Rey will think Victoria knew there was no body to be found, but she’ll insist that wasn’t possible. He’ll keep grilling until Michael suggests that’s enough. Later, Michael will speak with Victoria alone. He’ll want her to tell him if she’s done anything wrong, but Victoria will stand by her innocence.

Other Young and the Restless spoilers say Mariah (Camryn Grimes) will be down in the dumps. After a sleepless night, she’ll open up to Kyle (Michael Mealor) about Tessa’s (Cait Fairbanks) struggles with honesty. Kyle won’t think the situation’s hopeless. He’ll push Mariah to talk to Tessa and make the terms of their relationship clearer.

Next, Mariah will pay Devon (Bryton James) a visit. Since Hilary (Mishael Morgan) was a complicated person as well, Mariah will hope he can offer some advice. Devon will admit he wasted a lot of time waiting for perfection. He regrets that now, so he feels like Mariah should love Tessa for who she is – mistakes and all.

Mariah will eventually meet with Tessa at her studio. They’ll have a much calmer discussion this time around. Y&R spoilers say they’ll reflect on their love and the changes it’s brought to their lives. Tessa will assure Mariah that she made her want to be a better person. As proof, Mariah will once again demand the truth.

Tessa will suggest she knows something she shouldn’t, so she was paid to keep her mouth shut. After more pressure from Mariah, Tessa will admit the cash belongs to Nikki (Melody Thomas Scott). She’ll add that Nikki doesn’t know she’s involved, so Mariah will put the pieces together and realize this is blackmail.

Obviously, Mariah will want to know what Nikki was blackmailed over. Tessa will insist she can’t share that part. She’ll confess that Sharon’s (Sharon Case) involved and this is about protecting her, too. Mariah will threaten to get answers from Nikki or Sharon, so Tessa will be backed into a corner. She’ll whip out her laptop and shock Mariah with some evidence we don’t see on screen just yet.

Meanwhile, Mia (Noemi Gonzalez) will meet Abby (Melissa Ordway) and make an effort to be fast friends. That’ll drive Arturo (Jason Canela) up the wall. He’ll confront Mia privately and insist that all her games need to stop.

Over with Billy (Jason Thompson), he’ll tell Kyle about their catering crisis. They’ll need a new one for the Jaboutiques launch part ASAP. Kyle will know just the person to call! He’ll get in touch with Lola (Sasha Calle), who’ll freak out a bit before accepting the gig.

Billy will meet up with Sharon (Sharon Case) a little later. He’ll admit he’d only attend the bash if she went along, but he’ll get why she wouldn’t want to go. After Mia needles Sharon later, it’ll convince Sharon to be Billy’s date and make a few waves.

Finally, Lola and Mia will clash at Rey’s apartment. The Young and the Restless spoilers say Lola will want Mia to get lost, but Rey’s feisty wife isn’t going anywhere. She’ll make her biggest splash yet at the Jaboutiques shindig! We’ll give you updates as other Y&R news comes in. Stay tuned to the CBS soap and don’t forget to check CDL often for the latest Young and the Restless spoilers, updates and news.