BY Joanna Mazewski on October 30, 2018 | Comments: one comment
Related : Soap Opera, Spoiler, Television, The Young and the Restless 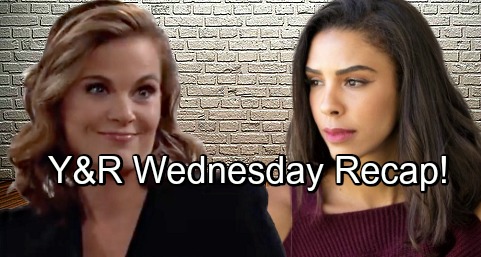 The Young and the Restless (Y&R) spoilers update and recap for Wednesday, October 31, tease that Rey (Jordi Vilasuso) will do some snooping. He’ll interrupt Mariah (Camryn Grimes) and Tessa’s (Cait Fairbanks) Halloween decorating to ask about Sharon’s (Sharon Case) charity project. Mariah won’t be able to offer any info, so she’ll tell Rey to get answers from Sharon.

Once Rey’s gone, Tessa will admit he was pumping her for charity info, too. Mariah will give Sharon updates on Rey’s questions later, but her mom will have more pressing matters to deal with. Sharon, Victoria (Amelia Heinle) and Nikki (Melody Thomas Scott) will discuss their big Chancellor Park problem.

Y&R spoilers say Nikki will worry about Victoria’s involvement. She’ll wonder if her daughter can handle digging J.T. (Thad Luckinbill) up. Victoria will suggest that there’s just no other way, so they’ll agree to move forward with the exhumation.

At Jabot, Billy (Jason Thompson) and Phyllis (Gina Tognoni) will share a tense elevator ride. Meanwhile, Jack (Peter Bergman) will talk CEO plans with his son. Kyle (Michael Mealor) will give Jack his full support – and not just because he wants the COO spot. He’ll also believe Jack’s the best person for this position.

Afterward, Jack will have an important meeting with Kerry Johnson (Alice Hunter). He’ll want her to serve as Ashley’s (Eileen Davidson) replacement in R&D. However, Kerry will reject Jack’s offer since he’s not in charge yet. She’ll turn down Billy’s deal as well. The Young and the Restless fans will soon find out why!

At the board meeting, Jack and Billy will make pitches for why they should be CEO. Next, Phyllis will describe her own vision for the screwed company. She’ll want to turn things around with more women backing her up. That’s when Kerry will emerge. Phyllis will reveal that Kerry’s on board, but only if they choose the right woman for the CEO job!

Back with Nikki and Victoria, they’ll consider leaving Sharon out of the digging drama. They’ll probably fear she’ll act too spooked with Rey. Nevertheless, Sharon will indeed join the chaos at the burial site. The Young and the Restless spoilers say more Halloween mayhem’s coming up later this week.

Until then, Kyle will put Summer (Hunter King) in her place. He’ll make it clear that she needs to butt out and let him pursue his shot with Lola (Sasha Calle). Since Lola will overhear Kyle’s comments, she’ll be awfully impressed. Lola will plant a kiss on Kyle afterward and agree to give him another chance. When Lola shares the news with Rey, he’ll warn his sister to be careful.

Other Young and the Restless spoilers say Jill (Jess Walton) will return for a shouting match. She’ll be appalled that she wasn’t notified about the sculpture removal. Jill will spar with Nikki (Melody Thomas Scott) and threaten to have her own crew handle it. That’ll naturally leave Nikki pretty rattled! Fortunately, Jill will stand down after Arturo (Jason Canela) promises to treat the art with care.

Nikki will dodge a bullet, but plenty more are headed her way! We’ll keep you posted as other Y&R details emerge. Stay tuned to the CBS soap and don’t forget to check CDL often for the latest Young and the Restless spoilers, updates, and news.