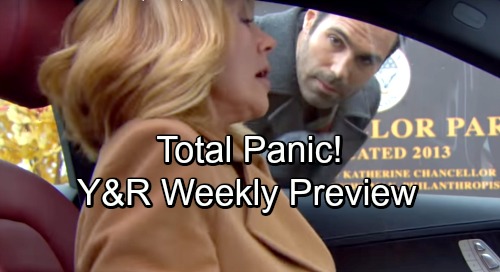 The Young and the Restless (Y&R) spoilers for the week of November 5-9 tease that some Genoa City shakeups are brewing. First, Nick (Joshua Morrow) will take his love life in a different direction. He’ll accept that he may not be able to win Sharon (Sharon Case) back, but that’ll leave him down in the dumps. Phyllis (Gina Tognoni) will be feeling blue as well, so they’ll bond over their issues.

One thing will lead to another and “Phick” will be back on – at least as far as sex goes. Nick and Phyllis won’t want to jump into a serious relationship again. Instead, they’ll just have some fun and see where it leads. They’re consenting adults who could use a break from all the turmoil in their lives. Phyllis and Nick may find that this is arrangement is exactly what they need right now.

Over with Sharon (Sharon Case), she’ll open up to Billy (Jason Thompson) about her struggles. He’ll share some struggles of his own, so they should help each other out. They can certainly relate to each other at the moment. Elsewhere, Jack (Peter Bergman) will get some upsetting updates. The info he receives will prompt a daring move, so this could involve Jabot.

Will Jack disagree with Phyllis’ new strategy? If he goes against her on something, it could stir up plenty of conflict. Elsewhere, Billy will also face a Young and the Restless shocker. That could tie in with Jack’s latest round of business chaos. Now that Phyllis is CEO, there are going to be threats coming from every angle. She’d better be prepared for drama from Jack, Billy and Kyle (Michael Mealor).

Speaking of Kyle, he’ll turn on the charm this week. Kyle had an excellent Halloween with Lola (Sasha Calle), but one night can’t lock down their future. If Kyle wants to keep this romance going strong, he’ll have to put some work into it. Kyle will do just that, but he’ll have to keep Summer (Hunter King) at bay, too. Let’s hope Kyle can find a way to navigate all this and allow his relationship to bloom.

In the meantime, Mariah (Camryn Grimes) and Tessa’s (Cait Fairbanks) relationship will be the one that’s blooming. They’ll kick off a new phase by agreeing to move in together, but trouble is just around the corner. Next, Arturo’s (Jason Canela) discovery will launch a major investigation. He’ll spot J.T.’s (Thad Luckinbill) inscribed watch in the park and deliver it to Rey (Jordi Vilasuso).

Y&R spoilers say it won’t be long until Rey tests the soil and finds J.T.’s DNA. When he announces J.T.’s murder at a press conference, the cover-up crew will panic. Nikki (Melody Thomas Scott), Victoria (Amelia Heinle), Sharon and Phyllis will all be a mess over this unfortune development.