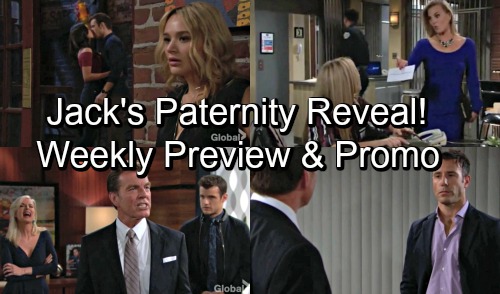 The Young and the Restless (Y&R) spoilers for the week of October 8-12 tease that we’ll see some shattered hearts along with some blooming love stories. For starters, Nick (Joshua Morrow) will struggle to make some adjustments. Life without Sharon (Sharon Case) should be rough, especially after the way things blew up at the wedding.

Nick will end up crashing a party a little later. It looks like Summer (Hunter King) may be at the bash, but Nick will track her down either way. He’ll most likely rip into her for running her mouth and breaking their agreement. Summer didn’t mean to spill the beans to Mariah (Camryn Grimes), but she shouldn’t have been blabbing in a public place. Nick should really demand his hush money back!

Sharon should have a tough time as well, but Rey (Jordi Vilasuso) will manage to lift her spirits. When she stops by his new apartment, things will get a bit wild. Rey will manage to start what appears to be a paint war, so Sharon and Lola (Sasha Calle) will get caught in a mess.

Speaking of Lola, she’ll hang out with Kyle (Michael Mealor). They’ll manage to push past any scheduling conflicts and enjoy a date with some hot affection. The Young and the Restless spoilers say Kyle will love getting to know Sasha, but Summer will spot KyLo’s intimate kiss and feel some serious jealousy.

Over with Ashley (Eileen Davidson), she’ll try to hide her trail without success. Since Ashley has some tracks to cover, that can’t be good. Y&R viewers can expect Jack to make a stunning discovery soon. He’ll be furious by what he exposes. In fact, Jack will snatch up a chair in the Jabot office and hurl it through some glass!

Could Ashley be to blame for Jack’s paternity search – Y&R buzz says YES! He hasn’t had any luck finding his biological father, so maybe it’s because John (Jerry Douglas) is his bio dad after all. Regardless, The Young and the Restless spoilers say the Abbott clan will face the crisis of the century. It sounds like a major battle’s brewing within the family.

In prison, Lily (Christel Khalil) will desperately need some comfort. Thankfully, Cane (Daniel Goddard) will be glad to step up. As Lily’s world falls apart, Cane will try to serve as her rock. Lily needs him now more than ever, so at least their love’s staying strong through this turmoil.

Finally, a threat will emerge for the cover-up crew. When each member receives a threatening message, they’ll have to come together as a team. Victoria (Amelia Heinle) will do whatever she can to keep the peace between Phyllis (Gina Tognoni) and Sharon, but it won’t be easy. As for Nikki (Melody Thomas Scott), she’ll grow increasingly nervous about the person behind the revenge drama.