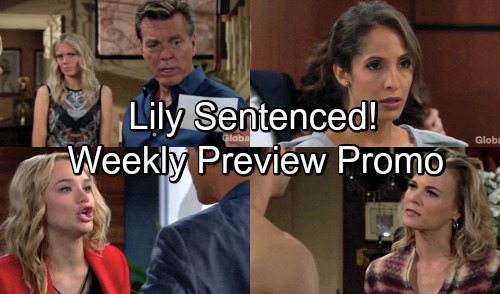 The Young and the Restless (Y&R) spoilers for the week of September 3-7 tease that some heated confrontations are on the way. For starters, Billy (Jason Thompson) will get fed up with Summer (Hunter King) again. There’s undoubtedly some attraction between them, but not enough to make Billy want to destroy his entire life. He loves Phyllis (Gina Tognoni), so he hopes to stay loyal.

Nevertheless, Summer will keep pushing. Y&R spoilers say Billy will contend that it’s not going to work. He’ll suggest Summer’s out of control if she thinks he’s going to risk everything to be with her. Summer will snap that risk is what Billy does. She’ll feel confident that she’s going to wear him down eventually.

Meanwhile, Phyllis will also be brimming with confidence. She’ll tell Kyle (Michael Mealor) that Summer “thinks she’s Phyllis Jr., but she has no idea what Mommy’s capable of.” Phyllis will argue that she can handle whatever Summer throws at her. She won’t believe Summer poses a real threat, but maybe she needs to reconsider that stance!

Other Young and the Restless spoilers say Abby (Melissa Ordway) will confront Rey (Jordi Vilasuso). She won’t convince Arturo (Jason Canela) to open up about his family issues, so she’ll try her luck with his brother. Abby will urge Rey to tell her what’s really going on. Rey may not offer much info, but that won’t stop Abby from digging for answers. She’ll do everything she can to get to the bottom of all this.

Across town, Jack (Peter Bergman) will mull over a shocking development. He’ll fill Ashley (Eileen Davidson) in and ponder the identities of the men in a photo. Jack will declare that he has to find out who they are. He’ll be certain that one of them must be his father, so this could be a huge break in his bio dad hunt.

Finally, Lily (Christel Khalil) will head to court. The judge will announce that they’re there to determine sentencing. The Young and the Restless spoilers say Lily will start to panic. She’ll look like she could burst into tears at any moment – and she probably will soon enough.

Y&R fans can expect explosive drama all week long, so don’t miss the shockers and shakeups ahead. We’ll give you updates as other news comes in. Stick with the CBS soap and don’t forget to check CDL often for the latest Young and the Restless spoilers, updates, and news.