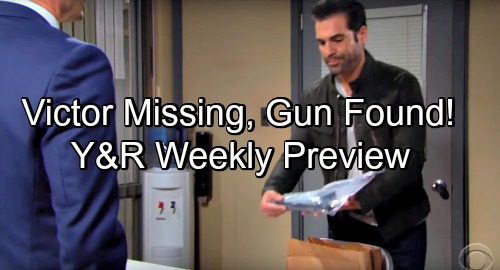 The Young and the Restless (Y&R) spoilers and preview promos for the week of December 3-7 tease that more mysteries are coming up in Genoa City. Y&R fans know there are already some big ones play. The show still hasn’t revealed who moved J.T.’s body or why. They haven’t let viewers in the loop on the new location either, so those bombs will have to drop eventually.

For now, some new shockers will take center stage and it’s possible they’ll tie in with the body mover. The Young and the Restless spoilers say the week will start off with a fiery night. Nikki (Melody Thomas Scott) will get an urgent phone call about a fire at the Newman stables. She’ll rush home with Victoria (Amelia Heinle) and see that the blaze is still going strong.

Fortunately, the main house will make it through this nightmare unscathed. The horses will be taken to safety as well. However, Nikki will definitely fear the threat. She’ll talk to Victoria about who could be behind this attack on their family. Tessa’s (Cait Fairbanks) name will come up briefly, but Nikki and Victoria will dismiss it just as fast. They’ll know this is way out of Tessa’s league.

Tessa is on thin ice with Mariah (Camryn Grimes) anyway, so she wouldn’t be out burning the Newman barn down for revenge. Of course, knowing that won’t Nikki and Victoria much closer to answers. They’ll ponder who could’ve sent this ominous message and worry that another one’s brewing.

Rey (Jordi Vilasuso) will certainly do some investigating, too. By now, he’s probably realizing that trouble follows the Newman clan everywhere! Victor (Eric Braeden) is still out of the country, but Nikki will try to reach him by phone. When she can’t get in touch with him, Nikki will fear the worst. She’ll tell Victoria that something terrible may have happened to her father.

The Young and the Restless spoilers say Victor will be missing, so the Newman family will be left reeling. To make matters worse, Nikki will find J.T.’s dirty clothes in her bed! It’ll undoubtedly be another message for the tense girls’ night gang.

A gun will also be found by Rey at some point. Nick (Joshua Morrow) will be questioned about it, but he won’t know any more than the detective. By the end of the week, Nikki will be the victim of a brutal assault. She’ll be rushed to the hospital ASAP, so things are going to get crazy.

On a less chaotic note, Billy (Jason Thompson) will have a major change of heart. After working with Phyllis (Gina Tognoni) on some projects at work, Billy will bond with her. He’ll realize it was a mistake to let Phyllis go, so he’ll make it clear that he’d like to try again.

Phyllis will lie to Nick so they can meet, but she won’t be sure about this. She’ll have to make a real decision on her future and it’ll bring some serious complications. We’ll give you updates as other Y&R news comes in. Stay tuned to the CBS soap and don’t forget to check CDL often for the latest Young and the Restless spoilers, updates and news.