The Young and the Restless Spoilers: Who Kidnapped Nikki Newman – Three Suspects Emerge

BY Sean O'Brien on December 23, 2018 | Comments: one comment
Related : Soap Opera, Spoiler, Television, The Young and the Restless 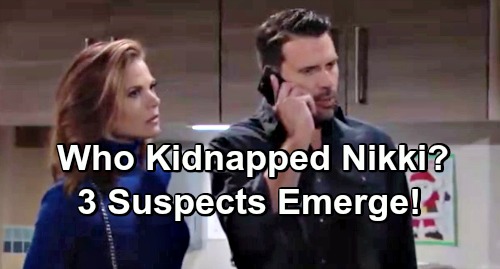 The Young and the Restless spoilers tease that Nikki’s (Melody Thomas Scott) kidnapping will shock her loved ones. Off the wagon, struck by an as yet unknown car driver, who the audience knows is Reed (Tristan Lake Leabu), and being comatose at Genoa City Memorial Hospital would be enough for almost anyone, but not Mrs. Newman.

No, it appears as though she’s also taken from her critical care room possibly by whomever has been targeting the coverup crew. While that knee-jerk assumption is natural for the three other members (Vickie, Amelia Heinle, Phyllis, Gina Tognoni, and Sharon, Sharon Case) of Nikki’s contingent to have, Y&R’s viewers have been provided with a lot more information then this trio.

Considering recent spoilers, a good guess as to who takes Nikki naturally leads fans to consider Victor Newman (Eric Braeden). He’s known to return on Christmas Eve, but is also wanted by the authorities. Rey (Jordi Vilasuso) could be avoided and Nikki could continue to receive care from her surgeon, Nate (Brooks Darnell), whose first rank is as her concierge doctor, if Victor orchestrated this move.

Who would be brash enough, while also having the proper resources to pull off a kidnapping in a major health care center? Well, this individual sports a trademark moustache, pumps ruthless blood through his veins, and has a flair for the ever-dramatic. Yes, Nikki’s husband, would be motivated to act.

Assume for a moment that it’s not him though. Well, then Tessa Porter (Cait Fairbanks) comes to mind.

Yes, she’s seen serenading everyone with her guitar at a vigil held in Nikki’s honor. But Miss Porter could be working with the underworld figures she’s claimed are her enemies. Possibly this young lady has been the head of a shady organization all along and will have her henchmen and ladies swipe Nikki in a second attempt to shake people down?

Thirdly, Ian Ward (Ray Wise) always deserves to do the perp walk. He’s an awful human being, but a great soap opera villain who’s played by one of the great character actors of modern times.

Ian never stopped being obsessed with Nikki. No matter what he was last shown doing and regardless of whether he was said to be incarcerated, or if he’s been on the lamb. Wise’s outstanding alter ego is clearly capable of capitalizing on Nikki’s misery if for no other reason than to exact further revenge. Dastardly dudes like Ian don’t need a logical reason to do anything, right?