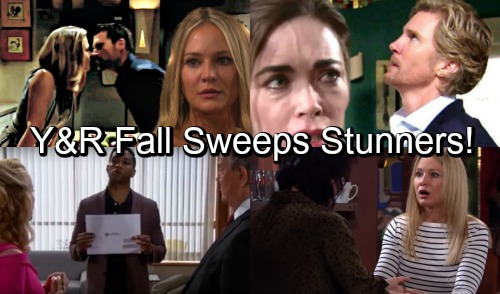 The Young and the Restless spoilers tease that multiple storylines will climax in the coming weeks that take us into Fall Sweeps starting October 25. Yes, a number of characters lives are about to change.

Vickie (Amelia Heinle) hasn’t been herself ever since J.T. (Thad Luckinbill) unexpectedly died. Who would be, considering the frightful circumstances surrounding that horrid night, what took place at Chancellor Park in the immediate aftermath of J.T. being killed, and the consequences that have existed ever since?

Nate (Brooks Darnell) is serving as Vickie’s concierge doctor, but is also developing into a confidante. Surely the potential for romance is soon set to bloom for both single parties.

Victor (Eric Braeden) might rip his moustache off if Jack (Peter Bergman) proves that they are brothers. The projected connection presented is that Albert Miller (played by the late, great George Kennedy) fathered both men. But that outcome seems too obvious after the false leads Bergman’s character has pursued these past months.

The first genetic connections that were disrupted involved Traci (Beth Maitland) only being a half-match to Jack and Billy (Jason Thompson) not being blood at all. As Maitland is returning to the show, Traci’s biological links seemed sure to be affirmed. In time, the initially rearranged genetics could prove to be the real story.

Could Y&R make Jack Abbott become Victor Newman’s brother after all these years? That seems like a preposterous change to push on the audience! But this is Genoa City.

Tessa (Cait Fairbanks) appears to be under assault from dark forces who helped get Crystal (Morgan Obenreder) to Canada. But while her sister’s safety seems to have been gained, Tessa is now in danger.

Mariah (Camryn Grimes) will confirm whether Tessa has been telling the truth about all that’s happened, or is conning everyone. That answer will also further the interlinked storyline between both characters, which is a hint as to how all is expected to play out.

Sharon (Sharon Case) and Nick (Joshua Morrow) are planning their wedding, while withholding two mega-secrets from each other. Sharon was part of an accidental killing and Nick slept with the woman who broke up Shick Part I.

Phyllis (Gina Tognoni) has been positioned in the center of Shick’s life once more. This time she led the coverup crew into not reporting J.T.’s death and then unlawfully burying him. Phyllis also had a one-off with Sharon’s fiance. Each plot point is dangerous. Together they have the power to stop Shick once and for all.