BY Dorothy Gale on October 23, 2018 | Comments: Leave Comments
Related : Recap, Television, This Is Us, TV 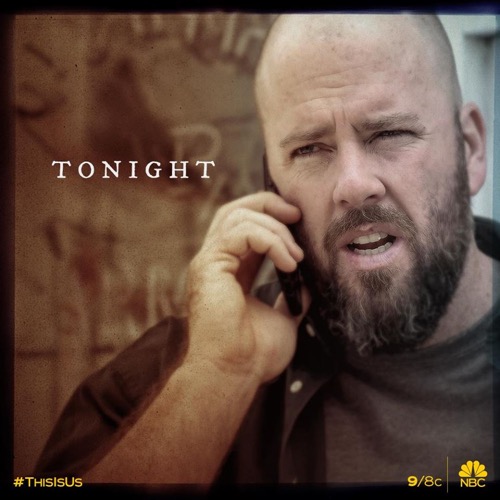 Tonight on NBC their new honest & provocative dramedy series This Is Us airs with an all-new Tuesday, October 23, 2018, episode and we have your This Is Us recap below.  On tonight’s This Is Us season 3 episode 5, “Toby,” as per the NBC synopsis, “Kate and Toby try to keep busy while waiting for big news. Randall embarks on a new journey. Kevin meets someone from his father’s past.”

We get a glimpse into Toby’s childhood, his parents are arguing and Toby keeps the fan on in his room so he doesn’t have to listen to it. Fast forward, Kate is excited about her eggs and can’t wait to hear the news from Dr. Jasper. The call comes in and they have three chances to get pregnant. Another call, it is down to one, they have one shot. Back to Toby’s childhood, he pretends to be Rodney Dangerfield and tries on a suit, makes his mother laugh and forgets about the baby crying.

We look back when the boys had their prom, Randall runs upstairs to transform himself from Erkel to Stephan. Randall, Kevin, and Sophie go to pick up Allison for prom, when she comes down the stairs her father enters the room, takes a look at Randall and says he can’t do this, he walks away. Allison’s mother apologizes.

Beth has an interview, she gets Randall’s help getting ready while Randall prepares himself for the campaign trail. Beth tells Randall to knock em dead. Randall is finding campaigning hard, people seem more interested in eating than listening to him.

Kevin and Zoe are going to Baltimore to meet Robinson, a guy that served with Jack. Zie and Kevin stop in a convenience store and Zoe doesn’t like the way the clerk is looking at her.

Toby makes Kate promise not to take a home pregnancy test and to wait until 4 pm when the doctor is going to call with the results. Kate thanks Toby for being her rock.

Miguel bought Rebecca a piano, she is so surprised, young Kate is not thrilled that the place is now smaller.

Tony goes to the pharmacy, tells them a story about how he went off his meds and needs to go back on them. The rep tells him to go back to see his doctor.

Kate is dressed up for a singing Adel-a-gram.

Kate is signing while Toby is desperately trying to find his therapist.

Kevin and Zoe arrive at their destination, the man is glad to meet Jack’s son. Robinson asks Kevin to join him for a glass of bourbon while they look at old photos, Kevin says he can’t, he is sober; Robinson is happy for him. Kevin goes on to say that his dad suffered from alcohol as well. Kevin thought his father was a mechanic, he wasn’t, he was a staff sergeant and squad leader who saved Robinson’s life. Kevin tells Robinson that he always knew there was more to the story because his father looked haunted everytime he would ask him a question.

Randall is cleaning up after trying to campaign and one of the men tell him to go back to where he belongs. He goes on to say that they don’t owe Saul Brown their loyalty, they owe him their lives for what he has done for the community.

We get a look back at Toby’s journey from when he began to see his therapist to when he met Kate.

Randall never made it to the prom, he goes home and Miguel is there fixing the fridge. He tells him that once his girl’s father saw him, it was all over. Miguel shares a story about growing up in Puerto Rico, he was determined not to have an accent. The first day in school, the kids gave him a nickname, Ricky Ricardo.

Zoe shares with Kevin that the clerk at the convenience store earlier in the day was rude to her because she was black with a white man – then she says he is worth it.

Randall realizes that he has to drop his campaign. He asks Beth about her interview, she says it went very well. Actually, the interview didn’t go that well, Beth lost herself a bit and had to be excused from the interview.

Rebecca calls Miguel and thanks him for fixing the fridge. He tells her that Kevin is there, he arrived from his prom and he is drunk. Rebecca offers to pick him up, but Miguel says he doesn’t mind taking care of him.

A look back at Jack asking Miguel to take care of his family he died.

Robinson gives Kevin some letters and pics from Jack and hope it helps him to understnad his father better.