BY Bianca on November 13, 2018 | Comments: Leave Comments
Related : Recap, Television, This Is Us, TV 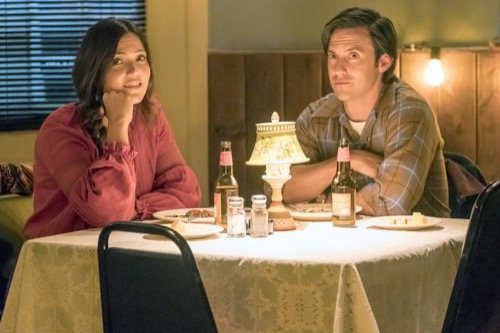 Tonight on NBC their new honest & provocative dramedy series This Is Us airs with an all-new Tuesday, November 13, 2018, episode and we have your This Is Us recap below.  On tonight’s This Is Us season 3 episode 7, “Sometimes,” as per the NBC synopsis, “Kevin and Zoe land in Vietnam. In the past, Jack and Rebecca take a road trip to Los Angeles. Jack’s war story continues to be revealed.”

This Is Us begins tonight in Vietnam, where a US soldier buys a shiny necklace for a girl he likes but sees her with another man, leaving it on the bar, another soldier takes it but is shot; the woman in the photo with Jack (Milo Ventimiglia) takes it off his neck and wears it. Kevin (Justin Hartley) stares at the picture while he and Zoe (Melanie Liburd) fly to Vietnam to find out about his dad’s mysterious during the Vietnam War.

Nicky (Michael Angarano) is surprised to see Jack in Vietnam, telling him if he dies out there it is not on him. Nicky is messed up as Jack promises to get him out of there. Nick tells Jack he isn’t “Superman”, it is just a stupid nickname.

Jack and Rebecca (Mandy Moore) are on their way to Los Angeles. Her mom thinks she is nuts going to LA with someone she barely knows as he feels the record label she is meeting with will be lucky to have her. They are going to stay with her friend and he needs to go see some folks in Reseda while they are out there.

Kevin takes pictures of him and Zoe, but she insists he doesn’t tag her in Instagram, revealing her dad lives in China, she doesn’t want him to know she is in Vietnam and doesn’t want to see him. She completely avoids questions about her family, talking about restaurants and the greatest trip ever.

Jack goes to see Major Dawson (Nate Boyer) about his brother, saying he can get his brother right. He says Nick isn’t cut out for this but Dawson says Jack is too late. Jack explains how he needs to save his little brother before Nam eats him alive but Dawson says the policy is to not allow brothers into the same outfit because no one wants to write two letters to the same mother and suggests he make his way back to his own Villa; Jack makes the long trek back.

Kevin refuses to try the traditional food in Vietnam as they eat at a market; Zoe jokes when she spots tourists, hoping they don’t look like them. Kevin sees the necklace and finds out she got it from a shop down the lane and Kevin finds out the woman sells a lot of them; they are similar to the one his dad wore.

Jack and Rebecca eat dinner, where she tells him that her friend Nicole got her demo to a producer. She says if they get into fantasy land, she one day will open for Neil Young, but in reality, she loves doing her small part in performing live and more people should slow dance. Jack pulls her onto the dance floor where they dance. Jack reveals he learned how to dance from his mom who loved to dance to Frank Sinatra at Christmas time and since his dad didn’t like dancing; he was the one who danced with his mom.

Rebecca spots an elderly couple dancing and cries a little, admitting she is an easy crier, Jack says he never cries; saying he’s gotten really good at swallowing the bad stuff. They get to their hotel room, where they have two separate beds and when she comes out of the bathroom, Jack makes fun of her “grandfather” pajamas. Jack kisses her and they go to their respective beds, but by morning they wake up together. Each night they are more and more intimate, thoroughly enjoying their road trip until one night Jack has nightmares, and Rebecca wakes him up, but neither of them talks about it. Rebecca asks him in the car, Jack tells her he doesn’t really remember his dreams and when she presses he asks her to stop.

Jack meets Bao in Vietnam, asking him if he will take him to the river on his motorcycle so he can get back to the Villa and he agrees for money.

Rebecca takes Jack in to meet Nicole (Yvonne Zima), promising he will love her, as she moved to LA to become an actress. They walk into the backyard where Nicole calls Rebecca “Becky”; Jack laughs as Rebecca says she is the only one allowed to call her that. Jack leaves to get them some drinks as Nicole wants all the details on Rebecca and Jack’s relationship. Rebecca admits Jack just came back from Vietnam and is working through some things but she doesn’t know anything about him. She is wild about him and simply wants to be wherever he is; she just wishes he would let her in.

Kevin feels Randall (Sterling K. Brown) might be right and should have left things alone and like his dad wanted. Zoe wants to go back to the hotel and lie down. Kevin complains that she doesn’t tell him anything about her life. She doesn’t feel that is fair as it was a terrible part of her life that she chooses not to dwell on. She tells Kevin she isn’t feeling well, but he doesn’t believe her until she begins to vomit.

Jack returns with champagne for him and Rebecca, but he freaks out when someone pops off the top of a new bottle; Rebecca reassures him things are fine. Back in Vietnam, Bao stops the motorcycle, telling Jack to wait but he gets suspicious and finds Bao giving empty cans to men in a barn, which Jack knows they have used to make homemade IUDs.

At Nicole’s, Jack admits to Rebecca that he cannot talk about Vietnam especially what he did and what he saw. He doesn’t want to bring that part of his life into what they have. She reveals she doesn’t know if she is coming back to Pittsburgh; both of them lie awake in bed.

The following morning, they wish each other luck. Rebecca is told it is great stuff and beautiful; they thank her for coming in and to keep in touch so they know what she is up to. They want to know if she has a show and when they learn she is from Pittsburgh, they say she is “Pittsburgh good”. Meanwhile, Jack goes to see Mr and Mrs Watterson, telling them their son, Roger “Squirrel” (Moses Storm) was under his command, and he is responsible for his death.

Bao stops and tells Jack to walk the rest of the way; he admits to Jack that sometimes he is a good guy and drives off leaving Jack on the road. Jack tells the Wattersons about tossing the football around and how they thought it was a quiet night. He reveals that he let his guard down and taking his eye off their son was the worst thing he did and he is taking full responsibility. He needed to come here and tell them that Roger was one of the good ones and he is sorry. Mr. Watterson (Paul Bond) puts his arm around Jack, telling him it wasn’t his fault.

Kevin checks on Zoe, who is lying in the bathtub. He brings her what he believes to be either coconut water or suntan lotion. Kevin feels that Jack keeping the first 28 years of his life a secret from Rebecca and it worked for them, but he doesn’t want that for him and Zoe. He wants to know everything about her, but if he can’t it is okay because she smells like peaches and she keeps snacks in her big purse and he is falling in love with her; whether she opens up to him or not.

Zoe admits that her father sexually abused her and tries to contact her every once in a while to make amends and she has no interest as she has moved on. She is falling in love with him too but is telling Kevin because her father has ruined so much of her life and she isn’t going to let him ruin this too. Kevin is shocked, saying she always seemed so strong and didn’t know. Zoe tells him she is strong. Kevin holds her hand and comforts her.

Jack opens the door for Rebecca who says it went okay. Jack tells her the visit went as good as it went as good as it could go. Rebecca says she doesn’t like the weather in LA, preferring the rain, telling Jack they said she was “Pittsburgh good” and she has decided to take that as a compliment. Jack wants to hear the song, but Rebecca says she is done the singing. He calls her “Bec” and says please. She says no one has called her that and likes it, singing the song. Jack cries when he hears her sing.

In Vietnam, Jack is watching his men fix the wiring at the Villa when Dawson brings Nicky to his Villa, telling him he has 2 weeks. Nicky yells at Jack that he should have left him to rot! Jack holds Rebecca’s hand as she tells him they should go home.