BY Sarah Luoma on February 27, 2018 | Comments: Leave Comments
Related : Recap, Television, This Is Us, TV 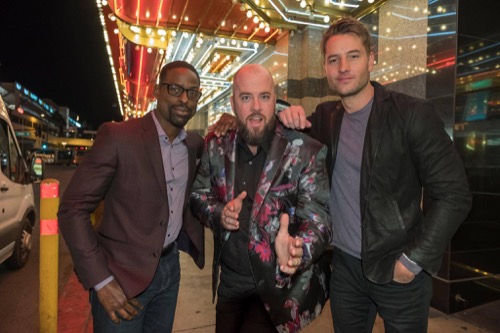 Tonight on NBC their new honest & provocative dramedy series This Is Us airs with an all-new all Tuesday, February 27, 2018, season 2 episode 16 called, “Vegas, Baby,” and we have your NCIS: New Orleans recap below. On tonight’s This Is Us episode as per the NBC synopsis, “Kate and Toby go to Las Vegas for their bachelor-bachelorette parties. Meanwhile, Jack and Rebecca celebrate their anniversary.”

Rebecca and Jack are celebrating their first-anniversary bowling. Rebecca gives him what he thinks is the most romantic gift, a scrapbook. Its four years later. On their anniversary she gets him a hammer. Years go by, they wake in bed. Rebecca makes sure Jack didn’t get her anything.

Deja comes to see Randall and Beth. Her mother and her are without heat. She needs 89.00 to get it back on.  They give her the money.

Beth is getting ready to go to Vegas when Randall suggests that maybe they shouldn’t go because of Deja. Beth thinks it will all be fine. They both need to go to spend time with Kate and Toby on their bachelorette parties.

Beth is hanging out of the top of the limo while Randall is worried about Deja. Meanwhile, Kevin calls the made into his Vegas room. He needs her to remove all of the alcohol bottles he has already counted.

Beth meets Kate and all of her friends in her room. Randall heads to see Toby and all his friends. Both groups get the party going as they try to get through some awkwardness.

Toby and the guys sit for drinks. Kevin jokes about how Randall once got two strippers at a bachelor party to quit and go back to school. Kevin sees a co-star and walks off to see her. Randall leaves the table to take a call from Deja. Kevin’s co-star tells him that her scenes from their movie together where to cut. Kevin realizes his scenes were most likely cut too. He leaves the party early. Randall talks to Deja who doesn’t seem to be in a good place with her mother.

Randall bows out of the night early. Toby isn’t happy. Kevin is back in his hotel room trying to keep his mind off of alcohol. Meanwhile, Kate watches Beth dance with strippers on stage. Randall comes in with an angry look on his face to see Beth on stage. When she gets off stage, Randall tells Beth about Deja. Beth cannot believe he is worried right now about nothing. They start to fight. Kate intervenes. Beth tells her that this is between her and her husband. Kate tells her that he is her brother even if he always chooses Beth before she storms off.

A young Kevin cries when he realizes the oven wasn’t on. The kids anniversary dinner for Rebecca and Jack is ruined now. He cries.

Randall finds Kate drinking Cosmos at a slot machine. The two talk about becoming closer after their dad died, eating hot pockets and watching Sex and the City. Kate asks him about Toby’s party. Randall tells her how he and Kevin bailed early. She tells him that Toby’s friends were actually the fillers. Toby really wanted to hang with him and Kevin.

Randall and Kevin show up at Toby’s hotel door. He is ready to go!

The kids surprise Rebecca and Jack with a meteor shower.

Kate goes to see Beth in her room. Kate explains that she has a hard time making friends, especially when it comes to strong women. Beth chuckles. She is so far from where she wants to be and now she is attached to Deja. She worries about her.

Randall, Kevin, and Toby are on a walk. They are all airing their difficulties. Kevin is upset about his career, Randall about Deja and Toby because his younger brother didn’t even come to his bachelor party. Toby was kind of hoping he could have two new brothers. They welcome him to the family.

Rebecca and Jack on the roof watching the stars with a blanket and pillows. They see a meteor.

On their way home, Randall apologizes to Beth. They made a decision about Deja together and he needs to stop bringing it up. Beth asks the driver to take a left. They go to Deja’s. A neighbor tells them Deja and her mother moved. They walk and find them sleeping in their car.