BY Dorothy Gale on March 6, 2018 | Comments: Leave Comments
Related : Recap, Television, This Is Us, TV 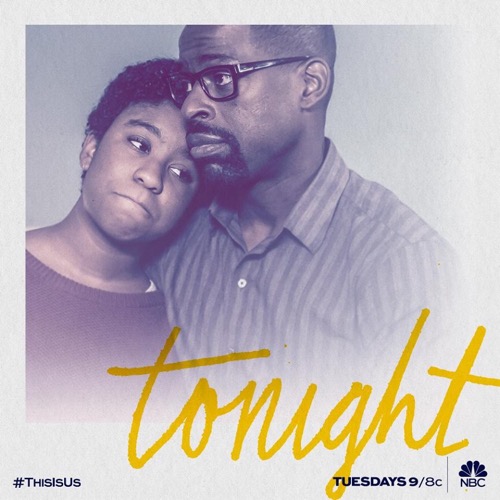 Tonight on NBC their new honest & provocative dramedy series This Is Us airs with an all-new Tuesday, March 6, 2018, episode and we have your This Is Us recap below.  On tonight’s This Is Us season 2 episode 17, as per the NBC synopsis, “Randall and Beth welcome visitors to their home.”

Deja is older, she is cooking in the kitchen and flashback to Rebecca cooking the kids and William cooking with his grandchildren. It is Shauna’s birthday, she tells Reja to get dressed, she wants to take her to school. Reja and Shauna talk happily all the way there when Reja tells her mom she is making dinner for her birthday. The night, Reja is cooking, she goes to open a can and badly cuts her hand. She tries to call her mom but there is no answer. Reja ends up in an emergency room by herself and gets taken care of. Child Services visits Reja to see if she is ok, they have tried to reach out to her mother and can’t find her. All of a sudden, Shauna shows up and Linda, from Child Services, wants to talk to her. Reja is taken away from her mother and Linda is trying to find care for her.

Reja is walking down the street with her friend Raven, who talks her into shoplifting makeup. Their foster parent finds out about the shoplifting and beats the children. Deja tells Linda she wants to go home, but her mother is not in shape to take her. Deja has every opportunity to tell Linda and she does. The children are removed from the Miller’s home. Raven is upset with Reja, she says that the beating wasn’t that bad and at least they wouldn’t be alone.

Deja is back home with her mom, they make dinner and her mother invites a friend from rehab over and Deja is not impressed. We fast forward and Shauna and her friend are fighting, he as a gun in the house and she is not impressed. Fast forward again and Shauna’s boyfriend is in the living room with friends of is and Shauna rushes out to go to work. Reja is cleaning up the dishes, then she heads out as well. Reja is a dance class, she is pulled out and finds out that her mother has been arrested. This is when Reja shows up at Randall’s house. Deja thinks back to when her friend told her that when she does find a good family, not to blow it.

We see various moments with Reja, Randall, Beth and the kids. Shauna shows up and takes Deja back home, tells her that they are going to get it right this time. Deja and her mom are paying bills, Shauna tries to keep a smile on her face. Deja sneaks out and goes to see Randall and Beth, tells them they are past due on the gas bill. Deja goes back home to Shauna and the landlord comes to the door shouting that they are three months behind on their rent. Deja is upset, all the money is gone, her mother took it to bail out her boyfriend. Deja leaves the room, she calls Randall but gets his answering machine. Deja then backs up everything she has and tries to pawn it but the store won’t take it. Randall calls Deja, he is in Las Vegas, she doesn’t tell him anything on the phone. Deja and her mom are packing up their belongings, they have been evicted from their apartment. Randall and Beth go to see Deja, they find her asleep in a car with her mother.

Randall and Beth take in bother Deja and her mother Shauna. Deja is happy to be back with the family, Shauna looks out of place. Beth and Shauna are alone, Shauna tells her that she had Deja when she was a teenager and she loves that Deja is happy in their home. Shauna says she failed Deja. Randall goes to see Deja, she is happy her plants are still alive, Randall says he watered them. Deja tells Randall that she is thinking about how many beds she has slept on in her life and lt is a lot. Deja tells him she is really tired, he hugs her. Shauna has packed her things, she is leaving and tells Randall she is not taking Deja with her.