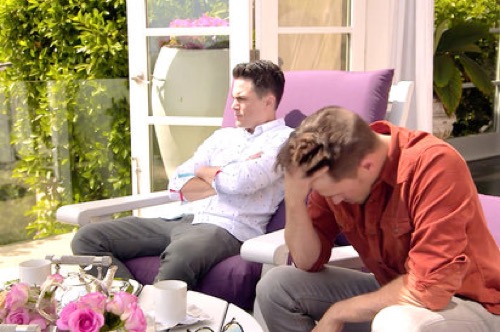 Tonight on Bravo Vanderpump Rules returns with an all-new Monday, January 1, 2018, season 6 episode 4 called, “Absinthe-Minded” and we have your weekly Vanderpump Rules recap below. On tonight’s Vanderpump Rules season 6 episode 4, as per the Bravo TV synopsis, “Brittany’s girlfriends put aside their differences and throw a Kentucky-themed party to help cure her heartache, but the group learns Jax’s indiscretion may not have been a one-time thing. When Ariana gets thrown off of her horse during practice, she must learn how to get back in the saddle.”

The morning after the big blowout, the girls were all together and remaining supportive of Brittany because they knew she had been hit with a lot. It had unfortunately dawned on Brittany that Jax was going to keep on lying to her unless she called him on it and so she was then left with the decision of whether or not she could handle such a relationship where one partner doesn’t entirely trust the other. But that’s why Brittany asked for space. She had her friends tell his friends that she didn’t want him to come home and she meant it, however, Jax spent the night partying with his friends and thought why not stop by his place that morning because surely Brittany must be “over it”.

But that wasn’t at all smart! Jax went to the house and saw that the girls were all there eating Taco Bell which shouldn’t have been something he got upset about yet still somehow managed to get upset about and had even created a scene. Jax started yelling at the girls about messing up his house and Brittany had asked him to leave only for him to blow up about how it’s his house. He said he paid the bills and that no one gets to tell him what to do in his own house. So the girls all tried to remind him that Brittany lived there too and that she deserved about who she gets to invite over as well as the people she gets to throw out. Brittany had wanted to be left alone with her friends and she later had to physically put her hands on Jax to get him to leave.

Jax, of course, still hadn’t understood the fact that she was upset and that he needed to give her space. But he managed to infuriate everyone when he later accused Brittany of putting on an act because she had been fine with working things out before she had talked to the others and so he said the other girls were putting ideas in her head. He said that they were all miserable and that they wanted her miserable too just so they could feel better about themselves, but Jax said all these things when the ladies were still at the house and so they did their best to support Brittany. They called Jax out for being a liar and told him to stop coming up with so many stories to get out trouble when he could easily just stay out of trouble.

Now if only Jax was willing to change that much! But when the girls left, he allegedly talked to Brittany and got her to calm down. He told Schwartz that they worked it all out and that it was a good thing Lisa had asked him not to go to Guillermo’s party because he didn’t want to risk things by hanging out with the whole group so soon after everything. So Schwartz told Jax about this idea he had that he thought Jax could bring up with Brittany after the party. He told Jax that maybe he should suggest if not an “open relationship” then something like that and that way he wouldn’t get into so much trouble. And so that idea appealed to Jax though it proved to be poor timing on Schwartz to make such a suggestion.

Schwartz had been in a good place with his wife Katie. Katie had recently become proud of him for signing on to be a business partner with Lisa and Ken and now He and Tom Sandoval owned five percent each in a new business venture that was sure would be a success. But Katie had started to talk about Lala’s relationship and how Lala was funding a trip on a private plane, so that caused Lala to lash out. She admitted to Scheana and Ariana that Schwartz had made out with her friend when his wife was on a business trip and that if Katie wanted to talk about her man then she would talk about Schwartz. So that had shocked both girls she told. They would never have known Schwartz did that without Lala telling them and Ariana for one thought she should at least warn Schwartz to tell his wife before the rumor mill did.

Ariana, however, chose to warn Schwartz when she next saw him and that had been at Guillermo’s birthday party. The party was going to be packed with everyone they knew and the event should have been about Guillermo. But Ariana picked that as her moment and she privately told Schwartz what she knew. So Schwartz tried to think back and unfortunately, he said he couldn’t remember. It turns out he has a history of making out with others without remembering it and so he decided to tell Katie that by making it out to be a joke. He told her in a group of people that he “apparently got really drunk and made out with somebody”. And so that devastated Katie because she thought they were past that.

Its happened before and she forgave him. But they were married now and she thought he had learned to control himself, but it seems he was still pulling the same old crap and so that broke her. Katie had wanted an explanation and all Schwartz would say was that he didn’t remember. So Katie started to wonder what she could have done to cause this mess because she had blamed herself and the others were all trying to snap her out of it when what she needed was her husband to say something to her that wasn’t followed with uncomfortable laughter. Schwartz just kept laughing at what happened rather than take it seriously and even Lisa eventually got upset with him because she along everyone else just wanted him to take what happened seriously.