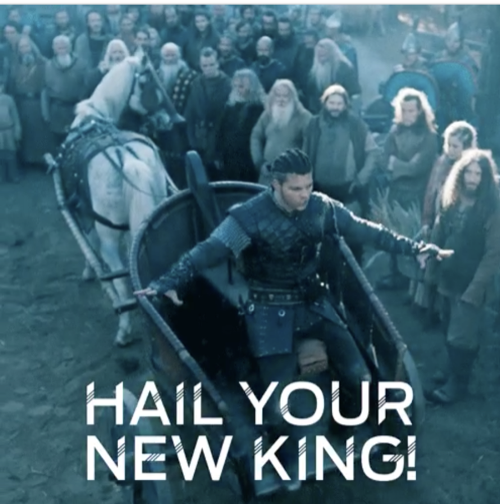 Tonight on the History Channel Vikings returns with an all-new Wednesday, November 28, 2018, season 5 episode 11 Fall Premiere called “The Revelation,” and we have your weekly Viking recap below. On tonight’s Viking season 5 episode 11 episode as per the History synopsis, “Ivar is crowned the new king of Kattegat just in time to welcome Rollo home; Bjorn, Lagerth and Ubbe must rely on unsteady alliances to survive.”

Vikings begin tonight with Ivar (Alex Hogh Andersen) leading his Viking army home to Kattegat with Hvitserk (Marco Ilso) and King Harald Finehair (Peter Franzen) behind him. He announces he is Ivar the Boneless, son of Ragnar and their new King. Inside the great hall, they all celebrate as Ivar urinates on Lagertha’s (Katheryn Winnick) throne; both he and Harald worry how long the others can hide from them. Harald feels hollow after losing his wife and child, but Ivar tells him that life goes on and to pick another beautiful woman.

Across the lands, Floki (Gustaf Skarsgard) talks about how their temple is burnt and sons have been killed; they have fallen back to old ways, proving possibly that they cannot change. He orders them to stop this vicious cycle of revenge or their young will surely perish. He is willing to sacrifice his body and blood in favor of the gods, but that they must all decide together. Aud (Leah McNamara) says they cannot do it but Eyvind (Kri Holden-Ried) feels they should since he is the one who led them there and they don’t even know if this truly is the land of the gods. He reminds them that Floki is only a man and it is a mistake for them to be there in this shit place as the gods are watching and laughing at them; Floki deserves to die for his lies with the majority of them agreeing.

Harald watches from the tower as a fleet of ships come towards Kattegat, with King Rollo (Clive Standen) in them. Rollo is welcomed back and thanked for his help; he says it was important to make an alliance as it is an important trading place. He reveals he is there to make a trade deal that is extremely favorable to him and also make an alliance for their mutual defense and they will send warriors to support him if he ever needs it. He talks about the old days and however Ragnar entertained his guests.

The voting is equal regarding Floki, but one. He is told to vote with family but he goes against his father Eyvind, saying Floki is more important to them alive and reminds his father that his family is his wife and child now.

Rollo tells Ivar he was jealous when he heard of the civil war Ivar and Hvitserk were getting into as he is too important and no longer allowed to fight. Hvitserk reveals that Ubbe (Jordan Patrick Smith) spared his life. Harald reveals that one brother may have saved the other but Harald killed his own brother, Halfdan the Black (Jasper Paakkonen). Rollo learns that Ubbe and Bjorn (Alexander Ludwig) are still alive, he says that of course, he is, since Rollo is the one who trained him. Ivar gets serious saying Lagertha lives too, but they have no idea where they plus Torvi (Georgia Hirst) are. Rollo wishes them luck finding them.

Lagertha refuses to accept this is the end of her story; she will not be captured, humiliated and killed by Ivar. She believes she is worth more. Ubbe believes there is somewhere they could go and Bishop Heahmund (Jonathan Rhys Meyers) suggests they go to England, willing to intercede on their behalf with King Aethelwulf (Moe Dunford). He would accept them but expect them to fight on his behalf; Lagertha doesn’t want to leave her country and her home. She is tired of fighting but wants to go to England.

Rollo wakes up one of his men and takes off in the middle of the night, Torvi brings food for a chained up Margrethe (Ida Marie Nielsen), who demands to see her husband Ubbe. Torvi says she will ask him, but Margrethe throws the bowl calling them witches. Ubbe comes out saying it is too dangerous to set her free, but she warns them that no chains will bind her. Ubbe knows it isn’t her fault as Torvi asks what he wants to do with her.

Lagertha talks to Bishop, who admits he wants to go back and Aethelwulf will restore him as Bishop but in his faith, he will have to celibate and cannot openly live with her. She hopes deserting her makes him sad. He touches her face and says he cannot renounce her as she is an incredible woman and God has meant for them to meet.

Two riders arrive at the village, shocking them as they realize it is Rollo, who comes face to face with Lagertha!

In Wessex, Alfred the Great (Ferdia Walsh-Peelo) takes the throne as king for the first time. He orders building fleets of news ships but also fears for the souls of his people and orders that all monasteries and religious houses within his realms to teach prayers and lessons in English; despite the protest, he is told that isn’t his right. He recognizes the supreme authority of the Holy church but the gift of knowledge belongs to all men. He returns to talking about being raiding by Northmen and assigns Prince Aethelred to guide them.

Rollo talks to Lagertha, saying he is trying to save her and Bjorn’s life and neither Harald nor Ivar can stop him. Lagertha is furious that he joined them against her and this doesn’t make sense but he feels she knows that he has always loved him and that Bjorn is his son. She tries to deny it but he gets right to her face and she can’t deny it to his face.

Bjorn interrupts them, wondering why they have been so long. Rollo tells him he is offering them safe passage to France, revealing that Bjorn is his son. Bjorn says he heard this before but he looks and has principles just like Ragnar, so undoubtedly Ragnar is his father. He doesn’t want to have a lifelong battle with him like Ragnar did. Rollo insists there is no battle between them and wants to bring him to France where life for him would be so sweet. He asks him to do it for the love he bears for Lagertha. Bjorn coldly tells him that he made his stance clear when he stood with Ivar.

Bjorn talks to Ubbe about it and when Lagertha tries to talk; Bjorn says he is going to kill him because he betrayed them and she nearly died because of him. Rollo meets Bishop, who says he tries to follow God’s commandments and walk in mercy and forgiveness. Bjorn is furious asking any of them if they have any pride as he isn’t afraid to die. Rollo begs for forgiveness from Bishop, who performs a prayer. Bjorn tells Lagertha if he kills Rollo he will die a happy man, but Ubbe and Lagertha pull him back. Rollo begs him to do it if he wants but Bjorn stops, saying he isn’t worth cleaning the blood off his knife and spits on him when he apologizes. Rollo leaves telling Lagertha they will never meet again.

Rollo returns to Kattegat, telling Ivar he has found them but before he reveals their location he wants their deal done. Ivar laughs at his conditions, while Harald stands up behind him. Ivar tells him he is asking for a very high price, but Rollo says he is in the position to do so. Later, Ivar arrives at the camp and finds it empty and the firepit cold. Rollo and his ships leave the port as Ivar finds Margrethe shaking in the pig sty. Meanwhile, Bjorn, Ubbe, Torvi, and Lagertha return to Kattegat and steal one of the boats, sneaking out in the dark of night.

Judith (Jennie Jacques) talks with Alfred, reminding him that a king has many enemies and few friends. She suggests that he consolidate his rule before it can be truly threatened by producing heirs and creates a dynasty, just like King Ecbert did. She tells him not to concern himself with it as she will find him a suitable bride.

At Alre River, Winchester Aelthered leads his men viciously into battle, where he seems to enjoy his control.

Ivar returns on his chariot with a bound Margrethe in the back; Harald learns she is tied up because she is “mad.” Hvitserk remembers her and unties her, but Ivar tells him that she will kill him as some evil spirit has possessed her. Harald watches with concern when Ivar says she might kill him too.

Ivar’s legs are being straightened and he almost kills the man, ordering him to make no more mistakes. The woman he noticed earlier is standing outside and he asks her to come in and sit. She is not married since he freed her, she lives freely with no ties. She reveals her name is Freydis (Alicia Agneson) and he says that he has never forgotten what she told him.

She says it is still true. He is a very special person, but he finds it hard to believe that as his whole life has been a struggle. She reminds him of all he has accomplished, the gods have marked him out and he is favored; above all men. He says he is in daily danger of being killed and feels like he can speak freely with her; she says he can trust her and would give her life for him if he’d ask. She wants to know what he wants her to do.

As the boat comes down the river, Bishop Heahmund shouts out to Aethelred, asking if he recognizes him and tells them not to shoot their flaming arrows at them. He orders them to put down their weapons. Bishop learns Aethelwulf is deal and Alfred is now King, not sure what that means for all of them now. Bishop is met with cheers as Lagertha, Bjorn, Torvi, and Ubbe are brought in by cage into the city. Bjorn looks around as people scream at them.