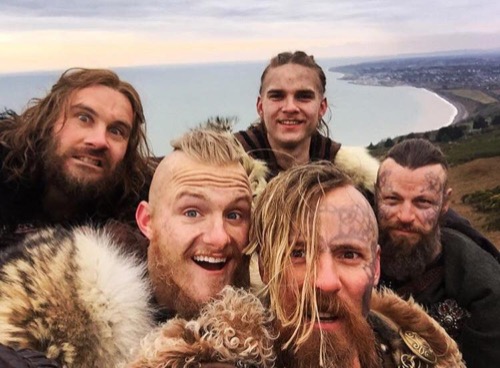 Tonight on the History Channel Vikings returns with an all-new Wednesday, January 17, 2018, season 5 episode 9 called “A Simple Story and we have your weekly Viking recap below. On tonight’s Viking season 5 episode 9 episode as per the History synopsis, “The army leaders consider their options in the aftermath of the battle. Meanwhile, in Floki’s camp, all hopes of binding the community together are dashed as tragedy unfolds.”

Hundreds of Vikings are dead and wounded, after the great battle for Kattegat. Queen Lagertha (Katheryn Winnick) walks among the people, as they are being tended to. Torvi (Georgia Hirst) informs her that Bishop Heahmund (Jonathan Rhys Meyers) wounds will heal and leaves them alone so they can talk. He thanks Lagertha who acknowledges that he is a Christian priest. She asks what it is about life that he loves so much; he says the joy and pain.

She asks if he loves human beings, but he talks about God’s love. She wants to know if he feels the same about men and women. He says he isn’t God, but he loves women, and not just spiritually. She says their gods encourage the love between and man and woman too, which marvels him, as he envies the lack of guilt. He confesses to spending many years of living in sin. He wants to know why she didn’t kill him, but she doesn’t know.

King Harald Finehair (Peter Franzen) tells Ivar the Boneless (Alex Hogh Andersen) they had the advantage, but they still lost. Ivar reminds him that he approved the plan, but Harald says next time he won’t be so quick to endorse his plans. Hvitserk (Marco Ilso) tells Ivar that their Uncle Rollo (Clive Standen) told him that if they ever needed his support, all they had to do was ask. When Harald questions Ivar on whether he wants the French to help them, he tells Harald that he is to leave at first light tomorrow.

Floki (Gustaf Skarsgard) talks with Kjetill Flatnose (Adam Copeland) who wonders why Eyvind (Kris Holden-Ried) truly stays. He is sure that Eyvind wants to be the king of the new land and is working on turning everyone against Floki. Floki, says he is trying to provoke a reaction and wants them to fall into violence and chaos, so he can rise to power and the mustn’t give him that satisfaction.

King Harald asks Astrid (Josefin Asplud) if she is thinking about their child when he sees her deep in thought. She tells him, if they go to war again he cannot tell her not to fight and he is to let her do what she needs to do. She wants their child to hear the cries of battle and wants him to be a warrior. She tells him she isn’t happy because so many people have died and they just lost a battle, how can he expect her to be happy?

At the new land, an argument begins when Eyvind’s sons refuse to help build the temple and admit they won’t be paying taxes either. When name calling starts, Flatnose steps in and tells them to step back, but the name calling continues and a physical fight ensues; both Eyvind and Flatnose grab their axes but Aud the Deep-Minded (Leah McNamara) orders them to put their weapons down, as Floki watches from the tower.

The leaders meet, as Bjorn Ironside (Alexander Ludwig) and Queen Lagertha learn that many ships filled with Franco soldiers have arrived. Ubbe (Jordan Patrick Smith) is surprised that Rollo would send soldiers to fight with Ivar and Hvitserk; Bjorn suggests going over to see if Rollo is there and to speak to him, Lagertha wants to go with him but Bjorn wants to go alone and try to negotiate something. Lagertha worries that they are in a position of strength now.

Hvitserk tells Ivar that Rollo was too busy with other things to come, but will celebrate when they are done; he did have one request though. He wants them to spare Bjorn’s life; Ivar smiles and says perhaps they will.

The Vikings in the new land begin their sacrifice and dedicate the temple to the gods as they drink the blood of the lambs and animals. Eyvind’s sons interrupt the ritual and pour the blood all over one of the other young men; Floki violent grabs him and is about to kill him but Aud stops him. He drops the ax and runs off as Flatnose and Eyvind look on.

The Bishop makes his way through the Vikings’ camp, as they repeatedly knock him to the ground. He rises up with his staff in front of Lagertha, who asks what he is doing. He wanted to talk to her about everything. He feels she may have some of the answers believing that fate brought them together. She tells him not to flatter himself. He says they are equals, he is interested and fascinated with her and thinks they have more in common than she knows.

He tells her they are going to fight again, and soon. She says he doesn’t have to fight for her, but he says of course he does. He says he will fight for her and die for her. He claims to have known her his whole life; she asks him if he really wants to sin again and blows out the last candle.

Ubbe sits with Torvi, who says he shouldn’t have married Margrethe (Ida Nielsen) as she was too young. Torvi worries because she left her children in her care, but Ubbe says she won’t hurt them. Ubbe says they are going to battle soon and either one of them could die and he doesn’t want to die without saying that he wishes it was her that carried his child. Torvi walks over to him, sits on his lap and kisses him.

Margrethe looks at the deck and sees Torvi and Ubbe kissing, but suddenly is called back by Torvi’s children. She calls them stupid, saying that their mother is dead or has died in battle and advises them to forget about her and to never imagine she is coming back, except as a ghost.

Bjorn meets with Ivar and Hvitserk, who tell him Rollo sends his love, and Rollo sent his forces to them because he sees justice in their cause. Ivar says that Lagertha murdered their mother and doesn’t deserve the kingdom. Ivar feels he must avenge his mother’s murder and Bjorn would do the same if it was him. Bjorn pleads with him, saying for the sake of their father and everything he believed in, he asks him not to put their people’s lives at risk.

Ivar feels the only reason he is saying this is because he sees all the “might” gathering against him, and if he thought he could win, he wouldn’t be there. Bjorn insists he isn’t afraid and this changes nothing. Several men approach to kill Bjorn and King Harald stands and orders them to stop as this is not their way; Ivar says it was worth a try but then waves them to sit back down. Bjorn is sorry Rollo had to get involved with this quarrel, sure that he had worlds of his own to conquer.

In Wessex, King Aethelwulf (Moe Dunford) meets with the lords, telling them the great Heathen army was just a precursor of more attacks; they have raiding fleets attacking Scotland and Ireland and now them. He says they are now a threat to every English Kingdom, and since their land and faith is in the greatest peril he has summoned them; they are going to figure out the best way to deal with this threat.

After the meeting, Aethelwulf takes off his crown and begins reading some of the books and gets stung by a bee. He is taken to his bed, where Aethelred (Darren Cahill) is already at his side. Judith (Jennie Jacques) returns with Alfred the Great (Ferdia Walsh-Peelo). King Aethelwulf’s face is severely swollen as he talks about their sins being washed away by the blood of Christ; he tells them to love on another and do what is best for Wessex. He reaches for Alfred, and tells them both to care for their mother and listen to her as she is wiser than both of them. He calls for “sweet Judith” and tells her not to wait for him as the angels are already there; he asks if they can see them, and he dies as his sons cry on his chest.

Halfdan the Black (Jasper Paakkonen) learns from Bjorn that they won’t make a deal. He reminds them in the end, they are all fighting for Ragnar’s legacy – a young farmer from Norway, risked his life to explore the world so their people could farm, that was his life’s purpose and ambition and Bjorn wants them to achieve that. If Ivar wins than Ragnar’s dreams are lost; Ubbe says they should prepare but Lagertha says they cannot leave Kattegat exposed. Bjorn explains how many Francs he saw as Halfdan says the gods already decided the outcome of the battle.

Judith tells Alfred and Aethelred that tomorrow the lords will select a new king, she is sure that Aethelred will be the one who is chosen as they have seen that King Aethelwulf was the one he has been training. Judith orders him to refuse the crown, saying these times need a different time of king. Judith says Alfred was sent to Rome to be blessed by the Pope because King Ecbert (Linus Roache) saw in Alfred the gifts and abilities that Aethelred didn’t have. He equipped him to be the future king. After the uncomfortable discussion, Judith works her way bribing some other Lords to choose Alfred over Aethelred.

The following day, the Lords gather as Prince Aethelred announces his father has died. Judith and Prince Alfred join him as the Lords must choose who the new King is. Aethelred is chosen, but he silences the group and thanks them for the nomination, saying it would be a great honor, even in these times of great danger, unfortunately, he declines the honor saying he isn’t fit to be their king and tells them to choose someone else. Not a single person agrees to Prince Alfred becoming King but Aethelred silences them and nominates his brother himself, and everyone agrees after that.

Bishop Heahmund walks among the Vikings who no longer push him. The coronation of King Alfred takes place while in the new lands, there is a massive fire burning down the new temple. Heahmund walks to Lagertha and kneels down and offers her his loyalty and sword, as Floki’s heart is broken when the temple collapses. Alfred accepts the crown on his head, Judith pleased with the developments. Flatnose’s son accuses Eyvind’s son of setting the temple on fire, he stabs him in the back of the neck, killing him; Floki begins to sob. Everyone in Wessex chants “long live the King!” except for Aethelred, who stares angrily at his brother who takes his place on the throne.