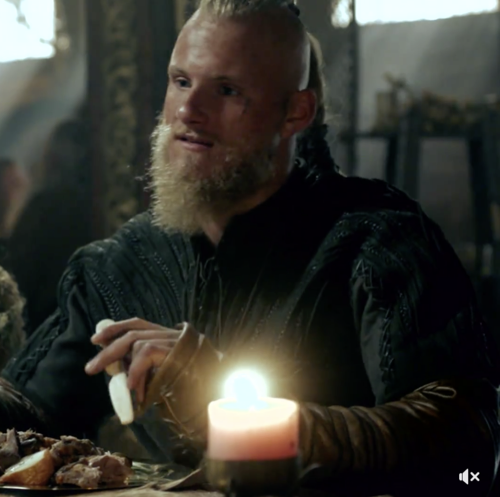 Tonight on the History Channel Vikings returns with an all-new Wednesday, January 3, 2018, season 5 episode 7 called “Full Moon” and we have your weekly Viking recap below. On tonight’s Viking season 5 episode 7 episode as per the History synopsis, “Bjorn returns to Kattegat to learn that an attack is to take place during the next full moon. Meanwhile, Ivar must decide if he can place his trust in a former enemy on the battlefield.

Ivar the Boneless (Alex Hogh Andersen) looks at the sky saying, when the moon waxes full again, they will seize their fame and fortune again and fight such a battle that the world will tremble, and the winner shall inherit the Earth. He leaves the room and Bishop Heahmund (Jonathan Rhys Meyers) in his chains.

Bjorn Ironside Lothbrok (Alexander Ludwig) and Halfdan the Black (Jasper Paakkonen) approach Kattegat, as the horns sound. They wonder if this is even home any more, as Halfdan says it appears the gods are not interested in fairness. Bjorn is greeted by Torvi (Georgia Hirst) and his children, as some of the villagers are happy to see him, but some do not look pleased.

Floki (Gustaf Skarsgard) leads the Vikings that followed him to the land of the gods. Aud the Deep Minded (Leah McNamara) silences those doubting him, saying what he speaks about, exists as she saw it in a dream. Floki won’t speak to them because he says they wouldn’t understand.

Bjorn enters the great hall where he is greeted by his mother, Queen Lagertha (Katheryn Winnick); she quickly informs him that King Harald (Peter Franzen) and Ivar plan to attack them during the next full moon. She presents Bjorn to King Svase, who will be joining them in the fight against King Harald, he gently kisses him on either cheek and says it is a great honor. He presents him his daughter, Princess Snaefrid and Torvi isn’t pleased with their exchange.

Halfdan and talks to Lagertha about their trip to the desert as Bjorn talks to Ubbe (Jordan Patrick Smith) about preserving their father, Ragnar’s (Travis Fimmel) legacy as much as they can as they fight against their brothers, Hvitserk (Marco Ilso) and Ivar; Lagertha is concerned about Halfdan’s alliances. She tells him about Harald’s lies and wants to know if he is lying but Bjorn defends him, saying he believes he will fight against Harald. Bjorn gives Guthrum (Ben Roe) the knife from Commander Euphemius, saying he is dead but perhaps he will see the other world one day himself.

Floki shows the Vikings their new settlement. Eyvind (Kris Holden-Reid) is furious that there is no houses there, and just as he threatens to cut off Floki’s head/* a spout of water shoots out of the ground, everyone is mumbling. Aud tells them to stop their stupid talk, this is water the gods have provided for them to wash their clothes, and even bake bread. She leads them towards Floki as Eyvind continues to have his doubts.

At the great hall, Bjorn watches Princess Snaefrid; Torvi tells him she isn’t jealous as she knows their love is over but just wants him to promise to always take care of the children and he does. He gives her a piece of jewelry but when she tells him to give it to another, he wants her to have it, she kisses him but flees after calling him “sweet Bjorn.” Lagertha approaches him and he says he wants the Princess, Lagertha is concerned about Torvi but he says it is finished between him and her, she cautions him that he knows nothing about the Princess. Lagertha sits with the King and tells him that Bjorn wants to sleep with his daughter.

Outside, Ubbe finds Torvi crying and offers her comfort. She doesn’t blame Bjorn, she gets up and tells Ubbe to give Ubbe the piece of jewel to Margrethe but he refuses and kisses her instead; Margrethe watches them from the distance.

Afterwards, Margrethe confronts Ubbe in the bedroom, reminding him that Lagertha is weak. She climbs on top of Ubbe, telling him not to fight Ivar, let him come and overthrow her. He is the oldest son of Ragnar, and he will be the King of Kattegat and she will have gone from slave to Queen.

Meanwhile, Lagertha talks to Bjorn about how much she misses Ragnar, how they came from farmer to ruler, she wants to go back to being a farmer, watching the sunrise and watching the sunset in the evening. Bjorn says she deserves it and is proud of all she has achieved. She informs him that King Harald stole Astrid (Josefin Asplund) and now her life is full of ghosts. He reminds her that she doesn’t look back, she always faces what is to come. He makes her laugh, saying she will be like Ragnar and Ivar will be like the wolf with fire dancing in his eyes and surely she would not want to miss that, she agrees.

Ivar and the Bishop play chess, while they talk about the war against his brothers Ubbe and Bjorn. Ivar laughs as he asks about his brothers frightening him. He admits that Bjorn might scare him a little bit because he is a great warrior as they call him Bjorn Ironside. He tells him that Lagertha knows she is going to die but she doesn’t know how bad it will be. Bishop Heahmund is surprised that Ivar is willing to trust him with creating a strategy; he agrees saying he chooses to fight for them believing that God has a plan for him. Hvitserk disagrees with Ivar saying he doesn’t know about being on Ivar’s side was fate or free will.

Astrid vomits into the water at the harbor as Harald comes to find her. He reveals that he saw her being sick, she admits she doesn’t think she is ill but believes she could be with child. She is beginning to cry but he is thrilled and holds her, saying she has just made him the happiest man.

Floki asks the Allfather why he isn’t showing himself to the people like he has shown himself to Floki. He says they believe and just need a sign. One couple celebrates that they are having the first child of the New World. Harald comes to see Ivar, announcing he is going to be a father.

In Kattegat, Bjorn goes to King Svase, saying he wants to marry his daughter. He says Princess Snaefrid is worth far more than he could ever give; the King says it is agreed if she wants to, the princess leaves and Bjorn follow her to another tent. She pulls down a rope with two balls on it and ties up Bjorn’s hands to the wall and sits on him, she slaps him and then tells him they have a strange custom in the North. She begins to paint him, explaining how they tie up a deer and cut off their balls, but the women eat them. She leans down telling Bjorn that she told her father she would marry him the second she laid eyes on him, saying maybe she won’t chew his balls but he will still have to work hard.

Floki giggles, saying it delights his eyes to see them all working hard together, where they can create a new earth where everyone is equal. He promises this is a new place and a new land and they must promise to be a better people, a different people than they were. Eyvind wants to know who will rule, Floki says no one, they will rule themselves; but Eyvind doesn’t believe him feeling Floki is the one who wants to be King. The horns sound as the fleet of ships begins to arrive for Harald and Ivar.

Alfred the Great (Ferdia Walsh-Peelo) pauses at the sea before he enters the Monastery. Inside he sees the murals of the Vikings attacking. The Abbott leads him to the Scriptorium, saying if Aethelstan (George Blagden) worked there at the time, his writing would have been there or his icons. The Abbott tells him about a monk that was taken by the Northmen and later returned to the shores, saying he abandoned God and embraced the Pagan way of life. Alfred won’t reveal how he is connected Aethelstan, but shows him Aethelstan’s cross, and that he got it from Ragnar.

Before Alfred leaves, he suggests to the Abbott that he shares everything in English since he is not a superior being, he should share the knowledge with the people who want to love and know God better.

Bishop Heahmund looks at the moon and recites Bible verses, talking about the Virgin Mary; Ivar scoffs, saying that there is no way a virgin could be a mother. Ivar insists that the serpent in the sea is true, but the Bishop laughs at Ivar’s explanation too. Ivar implies that Heahmund can’t be trusted but he defends himself, saying if Ivar kills him now, he will deny himself the chance to prove himself right. Ivar wants to simply believe there is someone in this world who doesn’t lie, cheat nor ever compromises and is always noble. Heahmund looks at him square in the eyes and tells him he is the one and Ivar can believe in him!

Lagertha and Bjorn stand at their shores, happy to see their numbers are growing too. They gather inside to plan their strategy. Bjorn suggests they weaken the coming army by attacking the ships so Ivar is forced to keep some of his armies back with the ships; they also plan to fight elsewhere as Ivar likes to scope out the land before the attacks. Ubbe says this is great but, Ivar might have anticipated all of this but he might attack Kattegat by sea after all and in that case, none of them will be there and will simply take it over. Lagertha chooses to go with Bjorn’s idea over Ubbe’s.

Alfred talks to Aethelstan’s cross, saying he can’t promise to follow him his humble footsteps. He wants to say the Lord’s Prayer with his father; halfway through the prayer, Alfred can hear his dad, Aethelstan saying the words with him. The Viking armies prepare for war!

Bjorn and Lagertha look at the full moon and say it is the time the end of their world is here!