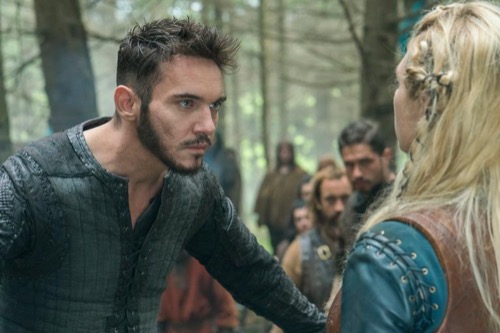 Tonight on the History Channel Vikings returns with an all-new Wednesday, December 5, 2018, season 5 episode 12 called “Murder Most Foul,” and we have your weekly Viking recap below. On tonight’s Viking season 5 episode 12 episode as per the History synopsis, “Ivar the Boneless asserts his leadership over the Heathen Army. Meanwhile, Lagertha reigns as the Queen of Kattegat.”

Vikings begin tonight with Bishop Hehmund (Jonathan Rhys Meyers) brought before King Alfred (Ferdia Walsh-Peelo) and his brother Aethelred. He greets Judith (Jennie Jacques) as he talks about the war between the sons of Ragnar (Travis Fimmel) and how Ivar the Boneless (Alex Hogh Andersen) won the war. Bishop says he has returned with the sons who were defeated as he has offered them safe passage.

Ubbe (Jordan Patrick Smith) and Bjorn (Alexander Ludwig) tell Lagertha (Katheryn Winnick) that the bishop has betrayed them, but they cannot be certain of that. She doesn’t believe he betrayed them but Bjorn can’t believe the famous Lagertha is a fool for love; Torvi (Georgia Hirst) mocks him, saying he has never been a fool for love, has he? Ubbe reminds them all this is where Ragnar was betrayed and its where they will all die too. Alfred toasts to Bishop Heahmund for being a man of God and accomplishing his mission as they sit for dinner.

In Iceland, Floki (Gustaf Skarsgard) doesn’t understand how the gods continue to spare him and why the people are so blind. He doesn’t know why they don’t answer him nor show themselves like they used to and begins to question whether they ever did.

English soldiers arrive and take Lagertha, Bjorn, Torvi, and Ubbe to see King Alfred, who acknowledges their potential for their kingdom and if they are willing to fight against his countrymen; he will honor his grandfather’s pledges. Lagertha accepts his offer as Alfred reveals it was Bishop who suggested the wise idea and he will honor it; now his servants are their servants. Everything is theirs too, they fought against each other and now together. King Ecbert loved King Ragnar and he knows Ecbert would approve.

Once they leave, the Bishop assures him that he can trust Lagertha; he wants his Bishop ring back but Aethelred says they found a replacement for him when they thought he was dead. He laughs at who replaced him, and since he isn’t dead he can renounce the decision but Alfred wishes he could but Lord Cuthbert is tight with the men and he doesn’t have enough power to sway the vote back to Heahmund as everyone knows he didn’t die; joining the Norsemen, fighting in the name of Pagan gods. Bishop says he will always fight in the Name of their Lord, but he must prove himself to everyone again before he makes himself Prince of their Holy Church.

Back in Kattegat, Ivar introduces Freydis (Alicia Agneson) to the crowd as the woman he has chosen as his wife and soon they will know her as the new Queen of Kattegat. King Harald (Peter Franzen) feels this is all about the kingship, telling Hvitserk (Marco Ilso) this is his plan to produce an heir and ensure the leadership forever. Margrethe (Ida Nielsen) smirks, revealing that Ivar cannot reproduce, which makes Harald smile.

Everyone leaves the great hall as Harald tells Ivar he wishes the gods smile on his happiness. Ivar wakes up a drunk Hvitserk, who tells Ivar he insults the gods. Freydis tells Ivar she wants him, and the two go to bed. He says he is not able to, but she tells him gods can do anything and to her, he is a god. She pleads for him to love her the way she loves him and she will have his child. He reminds her that the gods never had children with humans, but she tells him about Odin having a child with a woman. She cuts his hand and says by his blood she will bear him a son, who will be a god like him. He will be the embodiment of him, in times of war, peace and in time of treachery. She drinks the blood from his hands.

Bishop rides off to his old church, where he is greeted by Bishop Cuthbert. He finds it strange to find him on such a sacred stage as Cuthbert says God works in a mysterious way. Heahmund wonders if he would sacrifice himself anyway God wanted him to, as he would. God knows his struggles, revealing he struggled in the depths of hell like their Lord did, but at least his struggles are spiritual. Heahmund grabs his head, saying this is HIS place and the true Bishop as Cuthbert is a hypocrite who should step aside before the Lord finds him out! Cuthbert says him and others are looking out for the future of their country and seek Alfred’s overthrown. He didn’t have to say those exact words but Heahmund knows what he meant.

In Iceland, Eyvind (Kris Holden-Ried) complains how the gods are ruining the crops. Once again, the opposing sons begin to fight and Eyvind warns him if he returns again he will have his head. Aud (Leah McNamara) visits Floki, feeling people may be right that he is insane; wondering if all this is in his head and the gods are not there.

Freydis grabs someone in Kattegat and quickly has sex with him in one of the buildings. Meanwhile, Lagertha talks to Heahmund who reveals he went to his old church where he used to be Bishop. He reveals that the church and people want to kill the King.

Judith walks out to greet a Princess, introducing her to Althelred as a potential bride. Bjorn talks to Alfred about the lands promised to his father, saying they don’t need to prove anything as they have the legal right to the lands signed by King Ecbert. Alfred reveals Ecbert had already relinquished the lands to his father Aethelwulf before he did it. Ubbe says that he is now the king and can grant them the lands right now.

He says important people don’t want him to grant the lands, so Ubbe and Bjorn want to know why they should fight for him if everything is a lie? He tells them not to presume more on his charity as they have thrown themselves on his mercy, but in the meantime, he needs to go meet his future wife. Everyone sits for dinner, after introductions; Alfred talks about the princess’s father and how he saved Alfred’s life.

He reveals the Northman, at his dining table, are fighting alongside them. She has heard tales of Bjorn Ironside as Aethelred reveals Heahmund went to the Bishop but lies saying he was there about taxing and is working with the pagans, insisting he takes this seriously. Bjorn watches the conversation closely.

Outside, Torvi and Ubbe practice with the swords, something the Princess is curious to see a woman fight equally with a man. She never believed Shield maidens really existed; she is chastised saying they are evil and should be put violently put to death, not treated as guests! Bishop Heahmund and Lagertha take the horses for a ride but are observed sharing intimate time together.

Ubbe comes to see Alfred as per his request. He admits that Bjorn feels betrayed, but wants to know what he can do since for the time being, he cannot grant them the lands. He suggests they publicly renounce their pagan gods and be baptized as Christians. He is talking about Ubbe doing it, not Bjorn and if he does it, part of his burden will be lifted. He feels of all of Ragnar’s sons, Ubbe is the one closest to him and Ragnar was close to letting go of the Pagan gods and Ragnar’s death destroyed his grandfather, Ecbert. Ubbe asks for time.

Freydis returns to bed, telling Ivar she is with a child. He begins to cry as she tells him that it is his child. He says he loves her and she stabs him in the chest; he looks in her face and its Margrethe. Ivar jumps up from his sleep to see Freydis sleeping beside him. Ivar demands to know what Harald and Hvitserk are going to do with Margrethe; he says she will only kill him. He grows paranoid about Harald staying, but he assures him he doesn’t want to kill him because he doesn’t want the mess. He plans on raiding England with the others. Harald congratulates him on Freydis being pregnant but reminds him that it doesn’t always work out.

Heahmund and Lagertha are followed to the private place, where the man with the scarred face watches them have sex. Alfred finally finds time to talk to the princess, asking if she wants to marry him; Bjorn continues to observe their time together. Once Alfred leaves, the princess orders people to leave her alone so she can have her own thoughts and she approaches Bjorn. She initially tells him to go away but instead, they go to the barn where he leans her against the wall and kisses her.

Bishop Cuthbert is informed of what Heahmund and Lagertha were up to, saying his passions are going to destroy him. He needs to write so that he knows he will never again be Prince of the Church.

Hvitserk finds Magrethe crying on the floor in the cold cabin. She says she saw the Queen of Kattegat, and knowing she cannot have children has broken her head. She wants to be Queen, but Ubbe is a coward who betrayed her with Torvi. She tells him that Ivar is not kind to him and he must kill Ivar and then she will be queen. He says she is not mad, she simply needs some rest. He kisses her forehead, saying he will see her soon. She begins to sing to herself, alone in the cold room.

Bjorn lays in his bed when the princess arrives. She says God will punish her for being there, but he says his gods won’t. She joins him, revealing she is a virgin and he wraps her in his arms, kissing her.

Margrethe wakes up to several hooded men in the room. She pleads for them to go away, but they begin to throw knives at her. She says she loves Ivar and is harmless but they slit her throat. Heahmund receives the letter that there is proof of him fornicating with a Pagan woman, thus his sins are multiplied and Cuthbert plans to reveal everything to the King.

Heahmund rushes over to the church to confront Cuthbert, he pulls out his dagger, saying he has forced him to use this violence in this sacred place. He begs him not to commit a crime in the eyes of the Lord. Cuthbert pulls a knife from his own sleeve as Heahmund calls him a troublesome priest. Heahmund is able to get him first as Cuthbert damns him to hell. Heahmund begins to beat him, stabbing him through the eyes and then several times through the heart. Bishop Heahmund does the sign of the cross and throws his blade before exiting the church.