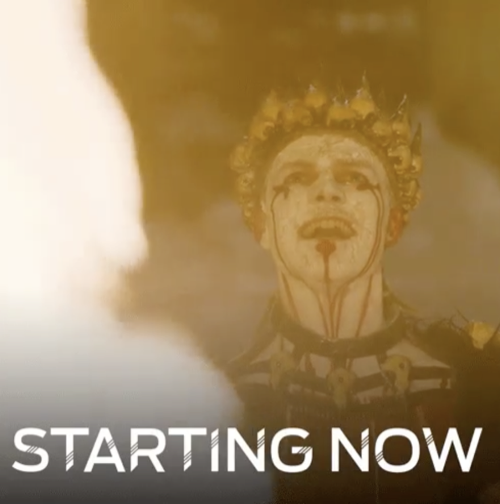 Tonight on the History Channel Vikings returns with an all-new Wednesday, December 19, 2018, season 5 episode 14 called “The Lost Moment,” and we have your weekly Viking recap below. On tonight’s Viking season 5 episode 14 episode as per the History synopsis, “Festivities for Ivar continue in Kattegat. Floki makes a decision. Harald’s army goes to Wessex.”

Vikings begin tonight with Kattegat preparing for their big sacrifice to the gods. King Ivar the Boneless (Alex Hogh) presents a woman, saying she is Lagertha (Katheryn Winnick); but the people say it isn’t her and shout, “Hail Lagertha!” Ivar orders for them to be taken away as Hvitserk (Marco Ilso) is approached asked why he isn’t at the celebrations. Ivar convinces the people that the woman is the evil witch Lagertha and shall be sacrificed in the name of Odin and his fellow gods, to cleanse the kingdom of its evil spirits. She is chained upside down, and her throat slit; her blood collected in a bowl and her body set on fire.

Back in the great hall, Ivar presents the blood to everyone as Lagertha’s but Hvitserk contradicts him saying he knows it isn’t her blood, she isn’t dead and Ivar is not a god. Freydis (Alicia Agneson) defends Ivar as he cheers to the thunder and lightning outside, saying Thor is acknowledging him as a god. Hvitserk goes outside where Thora (Eve Connolly) suggests they leave, but Hvitserk he jumped ship on his brother Ubbe (Jordan Patrick Smith). He doesn’t understand why, but one day he will.

In Iceland, both Eyvind (Kris Holden-Ried) and Kjetill Flatnose (Adam Copeland) reassure they have been looking everywhere for their pregnant daughter as Aud (Leag McNamara) tries to stop them. One of the women comes forward saying she didn’t want to bring a child into this terrible world and was going to make sure it didn’t happen.

Floki (Gustaf Skarsgard) sits alone in the rain, but the fire when Thorunn (Mei Bignall) tells him Thor wants to see him at the waterfall. She reveals that Asbjorn (Elijah Rowen) was there and told her she couldn’t have the child, hitting her over the head with a stone, revealing where her body is. Floki gets her to point where the trench is, but when he opens his eyes again Thorunn is gone.

King Harald Finehair (Peter Franzen) goes with his men towards Wessex, learning that Lagertha, Ubbe, and Bjorn (Alexander Ludwig) are possibly there. He believes they have ancient reasons to be there but he has unfinished business with Lagertha as she killed his wife and child. He believes the gods never intend for him to be happy and married but a Shield Maiden denies that saying she feels it in her gut; he smirks at her comment.

In Wessex, King Alfred (Ferdia Walsh-Peelo) reveals a huge Viking army is heading towards them, led by King Harald; he tells Ubbe, Bjorn, Lagertha, Torvi (Georgia Hirst) and Bishop Heahmund (Jonathan Rhys Meyers) they will fight alongside Aethelred (Darren Cahill) and if they refuse, they will be killed. He reminds them of the huge personal risk he made for them and hopes they won’t betray them; Ubbe immediately agrees to stand with him. Alfred dismisses them after he notices that Bjorn cut off all his hair. He asks Ubbe for a favor.

Floki brings everyone out to the trench that Thorunn told him about and they find where the ground has been disturbed; they find her body. Flatnose learns from Floki that Thorunn told him where she was, and when asked who did it; Floki tells Asbjorn to admit his guilt but his father tells him to stay quiet as there is no proof but Thorunn’s husband attacks him. Floki tells them they have to make a decision.

Bjorn walks with his brother, Magnus (Dean Ridge) who says his anger is what kept him alive. He feels he is Viking and as Ragnar’s son, revenge is everything; that is all he cares about. He admits he hates Alfred, suggesting they don’t need to fight on Alfred’s side as King Harald is on his way with a great army.

Ethelfled (Ann Skelly) comes to see her husband, Alfred, but he is too busy; promising when he returns he will perform his duties as a husband. Aethelred speaks with the Bishops who feel Alfred is a weak and feeble leader, who leaves his fate in Heahmund’s hands. They want to place all their faith and trust in Aethelred, the one true heir; advising to have a meeting with Alfred and Heahmund at the same time, so they can kill them all at once and Aethelred will be anointed King of Wessex and King of kings. He agrees and tells them to call the council.

Ivar talks to Freydis about names for his son; she tells him that she believes their son is so strong he will crawl out of her legs soon. He says if he is fully formed, he prefer him to be walking. They are interrupted when the rebels are brought forth before him. Ivar smacks one of them, demanding why they would want to rebel as they are especially privileged to be ruled by a god. He says he is merciful god and tells the rebel to cover himself in ashes and beg his forgiveness, he will let him live. He spits on Ivar’s face, who only laughs at him. He tells his men to hang all of them and let their bodies be shown to all the people, saying hatred must never take the place of love!

The following day, Hvitserk sees all the bodies and goes to see the Seer. He tells Hvitserk he will accomplish what others have failed to accomplish but the cost will be too high. He says he can try to sail away. He says everything is becoming darker and he is afraid; that is the only thing he knows is he is afraid of going into the dark.

Lagertha sneaks into a room to see Heahmund. He calls her “my love” and kisses her, saying they are going to fight Harald and her own kind. She says Harald has always been her enemy but he thanks God that she is fighting beside him, whether they live or die together; calling himself a miserable sinner. He admits he fears the Lord, but at this moment he desires her more; saying she is beautiful and alive as he would go to hell for her.

Harald knows they are about to fight the legendary sons of Ragnar, who are close to gods; but his guard reminds him they are only human and the ax will kill them too. Harald wonders if Gunnhild (Ragga Ragnars) believes fate brought them together but she doesn’t want to betray anyone, just feels right to be there – inevitable. She knows her life is about to change.

The Bishops and Noblemen gather as Aethelred and Alfred sit together and talk. Alfred informs his brother that he plans to lead the army himself, but requires his support more than ever; hoping he believes in him as Alfred tells him he loves him. Alfred stands before his men, talking about how he is going to lead them into battle, along with Ubbe, the Christian son of Ragnar, Lagertha, and Bjorn. Aethelred says he cannot do it as Alfred leaves with his mother, Judith (Jennie Jacques).

After the meeting, Bjorn introduces Lagertha, Torvi, and Ubbe to Magnus; they know who he is. He feels, at last, he belongs somewhere as Bjorn explains Alfred is betraying them with no intention of granting them the lands. Lagertha questions him about ever meeting Ragnar as Ubbe says Ragnar insisted he never slept with his mother. Magnus tells them what his plan is. Lagertha also says Ragnar never slept with the Queen, but Bjorn says they should believe in him. Magnus leaves when the only one who believes him is Bjorn. Ubbe says they have choices to make.

Floki reveals he has made a decision but Eyvind tells him that he is the lawgiver. Floki reminds him that with the death of Thorunn, he has avenged his son’s death, three times over. Helgi (Jack McEvoy) is told to shut up and stop weeping like a woman. Aud tells them Floki is right as he tells them Eyvind and his entire family, including Hegi are expelled from the settlement. He orders them to leave and find another place far away from there. When he says winter is approaching and the food is scarce, Floki says it isn’t his plight. Eyvind says they could fight, but Floki tells him that he will lose. Eyvind holds his ax to Floki’s throat but Floki says he cannot kill him no matter how hard he tries and he pulls away.

Harald and his men arrive on land, while Eyvind and his family depart the Iceland settlement in the rain. Ivar talks to the Seer, saying these are days of rejoicing and cannot deny Ivar’s divinity. He tells him that he should have welcomed Ivar into his house and his time here will be full of praise and glory. The Seer refuses to tell anything other than what he truly sees. He tells Ivar that he is Ivar the Boneless, son of Ragnar. Ivar insists he is a god, but the Seer says they will all go into the dark. The light is as broken as his legs and a snake has settled in Ivar’s skull and his eyes betray him. He screams out about the horror as he sees a terrible vision but Ivar takes his ax to the Seer’s head and kills him.